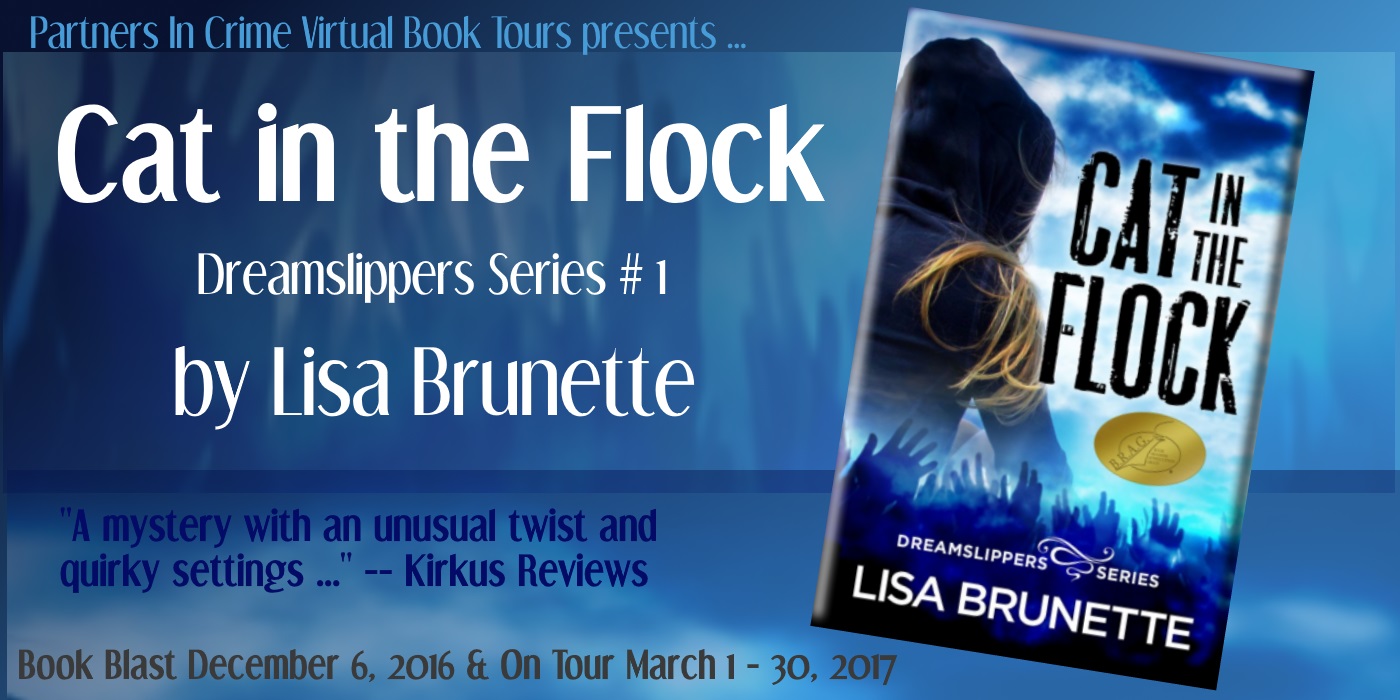 Cat in the Flock 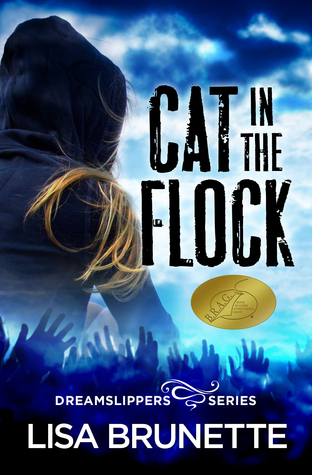 A sexy murder-mystery with a spiritual edge.

For most people, dreams are a way to escape reality. But for Cat McCormick, they’re a way to get closer to the truth. Cat can ‘slip’ into other people’s dreams.

After graduating college with a degree in criminal justice but little in the way of real-life experience, Cat moves from the Midwest to Seattle to apprentice with her Granny Grace, who shares the ability. Granny uses dreamslipping as a private investigator, and Cat plans to follow in her footsteps.

But forced to take work as a security guard, Cat discovers a mother and daughter on the run. Following the clues, she goes undercover in a Midwestern megachurch, where she finds redemption and goodwill amidst repression, hypocrisy, and murder.

“A fascinating tale of mystery, romance, and what one woman’s dreams are made of. Brunette will keep you awake far into the night.” — Mary Daheim, bestselling author of the Bed-and-Breakfast and Emma Lord/Alpine mysteries

“Gripping, sexy and profound, CAT IN THE FLOCK is an excellent first novel. Lisa Brunette is an author to enjoy now and watch for the future.” — Jon Talton, author of the David Mapstone Mysteries, the Cincinnati Casebooks and the thriller Deadline Man

“A little Sue Grafton and a dose of Janet Evanovich… is just the right recipe for a promising new series.” — Rev. Eric O’del

“The launch of an intriguing female detective series… A mystery with an unusual twist and quirky settings; an enjoyable surprise for fans of the genre.” — Kirkus Reviews

Sherrie marched into her daughter’s bedroom and dragged a child-sized roller bag suitcase out of the closet. The girl stood in the middle of the room, still in her pajamas. Milk from breakfast had dried around the edges of her lips.

“Ruthie,” the mother said. “I need you to get dressed. We’re going to take a…trip.” Sherrie tried to make her voice sound cheery, but the desperation she felt came through in her tone.

Sherrie set the suitcase on the bed. The bubble- gum pink had once seemed innocent but now looked fleshy and indecent. She glanced at the clock over the bed. He’d been golfing for a good fifteen minutes by now, long enough for her to make sure he didn’t come back for a favorite club or the right gloves. She wanted to be on that morning flight by the time he got home and discovered them gone.

She flung open the chest of drawers and grabbed all of the girl’s socks and underwear, a pair of corduroy pants, black cotton tights, a sweater the color of a Midwestern sky. Nothing pink. Only warm things. Seattle in her memory was cold and wet. It was a grey city; grey clouds over grey buildings. Even the water was grey.

One doll would fit. Made of cloth, it could be folded in on itself and slid down the backside of the suitcase.

“Can I bring the ballerina skirt?”

Any other day, she would have corrected her daughter, who needed to learn the precise names of things. Tutu. There it was in the closet, hanging because it took up too much room in the drawer. She yanked it free, sending the hanger to the floor. Ordinarily, she would pick that up; her house was so clean it hurt her eyes with its spareness—as if theirs were a showroom house, not lived in. She left the hanger there, aware of the thrill this fraction of disobedience gave her. She shoved everything into the little pink case, but with the fluffy tulle taking up so much space, the zipper would not close. The choice was clear. The doll would be a comfort to Ruthie in Seattle, but the tutu would not.

“We’ll come back for this later,” she said, tossing the tutu onto the bed. The zipper closed, the sound of it satisfying.

“Then you’re going to have to wear it. Now get dressed while I pack my clothes.” But she felt a pang of guilt for her reprimanding tone, and for having to leave the tutu. Bending down, she used her thumb to wipe some of the milk crust from her daughter’s face. “I’ll let you wear anything you want on this trip, okay, sweetheart? And clean your face with the cloth in the bathroom, like Mommy showed you.”

The girl nodded, as if sensing this was not the time for a tantrum.

Sherrie’s own packing, she did with even less consideration. Under things, shirts. A fleece hoodie. Warm socks. She remembered she needed layers in Seattle. Sometimes it could seem warm even though it rained and the sun had not come out for weeks. Her keepsakes in their tiny, locked chest would not fit. They were the only things she had to remind herself of her life before this, but she would have to leave them behind.

Sherrie kept watch on the clock and glanced out the window twice to make sure his car wasn’t out front even though she knew he wouldn’t be home for another hour. The sun had risen blood-red over the cornfields in the distance, lighting them as if on fire. She’d miss that. And she thought of thunderstorms, which seemed never to occur in Seattle. She’d miss those, too.

Ruthie appeared in the doorway. Her face was clean, but none of her clothes matched. She was wearing pink high-tops that seemed wrong for the city they were going to, the situation, and everything else, but she had apparently decided not to wear the tutu.

“Time to leave.” She took the girl’s hand, promising to herself she’d never let go. 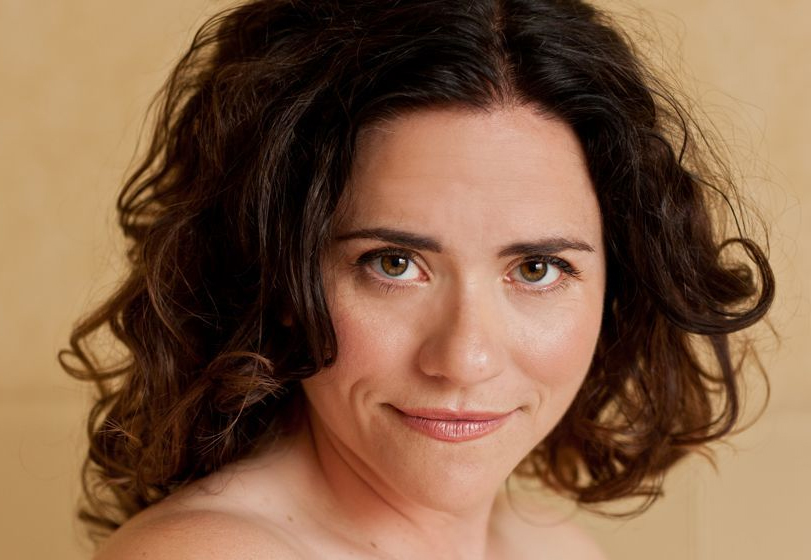 Lisa was born in Santa Rosa, California, but that was only home for a year. A so-called “military brat,” she lived in nine different houses and attended nine different schools by the time she was 14. Through all of the moves, her one constant was books. She read everything, from the entire Nancy Drew and Trixie Belden mystery series to her mother’s books by Daphne DuMaurier and Taylor Caldwell.

A widely published author, game writer, and journalist, Lisa has interviewed homeless women, the designer of the Batmobile, and a sex expert, to name just a few colorful characters. This experience, not to mention her own large, quirky family, led her to create some truly memorable characters in her Dreamslippers Series and other works, whether books or games.

Always a vivid dreamer, not to mention a wannabe psychic, Lisa feels perfectly at home slipping into suspects’ dreams, at least in her imagination. Her husband isn’t so sure she can’t pick up his dreams in real life, though.

With a hefty list of awards and publications to her name, Lisa now lives in a small town in Washington State, but who knows how long that will last…

Lisa publishes a bimonthly newsletter. Sign up and receive a free book!

Don’t miss these great stops on the Cat in the Flock tour!

Don’t Miss Your Chance to WIN!