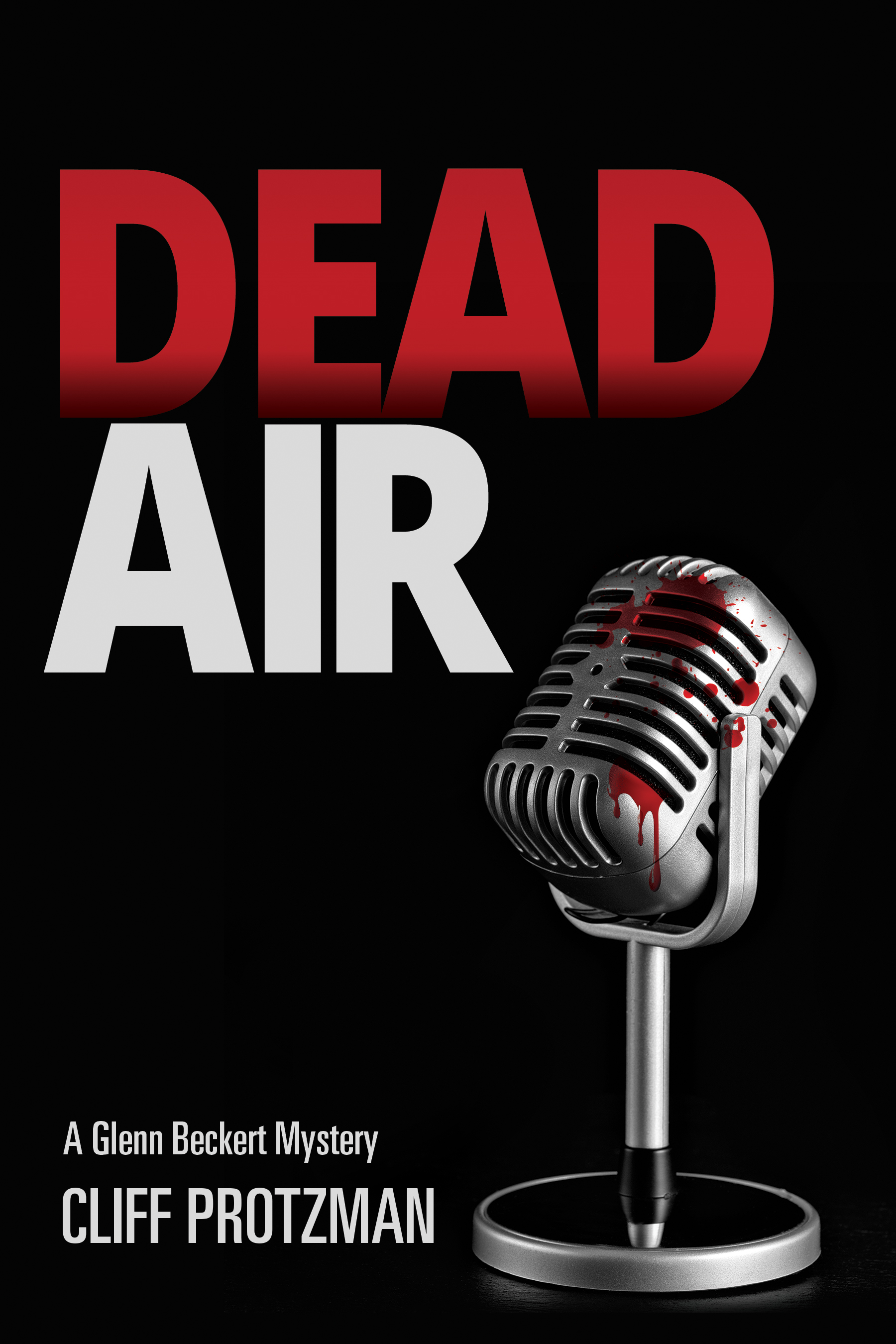 Dead Air signals trouble at the radio station. Glenn Beckert discovers his high school best friend is shot in the head while on the air. Beck, the owner of Blue Water Security, is employed to provide security for the station.

He becomes willingly embroiled in the investigation by the not-so-innocent widow. The list of potential suspects is long, gleaned from the numerous extramarital affairs of the victim and widow. The pending sale of the radio station has created friction between his now dead friend, Richie Zito and the major stockholders. Motives for murder becomes increasingly murky after the search reveals an encrypted file on Zito’s laptop.

Beck enlists the help of a friend from college, Irene Schade, to break the code, revealing a money laundering network leading to the financial and political powers of his beloved city of Pittsburgh. Their collaboration ignites the flames of passion each had considered extinguished.

A former college teammate, police Lieutenant Paglironi delivers a message to back off. Arrogantly, he ignores his friend’s advice. The threats from less friendly sources are more ominous, forcing Beck to move in an unfamiliar world. A startling revelation from his client forces Beck to deal with his inner conviction of right and wrong, challenging the gray areas of his ethical principles. Betraying his client’s confidence could expose the killer. The alternative is to confront the suspect and take matters into his own hands. Either way his life is in jeopardy.

Dead Air. It was the most unforgivable of sins. I was standing at the bar in Jergel’s Rhythm Grille in Warrendale, PA when the overhead sound system finished blaring “In-A-Gadda-Da-Vida,” the seventeen-minute, two-second version, then dove into silence… and stayed there.

Minutes crawled past while WZOC, better known as Z-Rock to Pittsburgh-area listeners, remained silent. The long version of the Iron Butterfly song was played when DJs need extended bathroom time. Apparently, it was not enough time.

The seventeen-thousand-square-foot bar and restaurant was beginning to fill up. The stage hands scrambled over the stage in a well-orchestrated dance as they prepared the stage at the rear of the building. I was at the front bar, one of six serving the customers. The crowd noise increased due to the silent overhead system. The bartenders and service personnel went about their jobs, oblivious to the lack of music. I appeared to be the only person who noticed it. The dead air was an unexpected lapse for a normally proficient staff at Z-Rock. The station owned by my high school best friend, had been my first client, so I was always glad when the bar staff piped it in to provide background noise.

A Pittsburgh favorite, The Clarks, were scheduled to take the stage in forty-five minutes. Their classic rock style was often compared to Tom Petty. Z-Rock had introduced The Clarks to the Pittsburgh market, and it remained a strong supporter of the band. They had parlayed the station’s promotion into a broader following along the Southern Atlantic states. The quartet was almost as well-known in the city as the Pittsburgh Steelers’ starting lineup. I had had the great fortune to see many of their local performances.

Before heading to the front door, I finished my IC Light, a low- calorie brew from Pittsburgh Brewing. The bartender grabbed my empty bottle and asked, “Another one, Beck?”

“No thanks; probably later.” I headed toward the entrance, featuring solid wood double doors, the left side closed to restrain the incoming crowd. The line stretched outside beyond my view.

My firm was in charge of crowd control for the event. Even though I was on duty tonight, my plan was to be more of a spectator.

In my earpiece, I heard my site manager of Jergel’s security, Lance Parisi. “Beck, we have a problem at the front door. This patron is drunk and belligerent. He may be armed. I’m trying to get him to leave.”

I replied, “On my way.” As the owner of Blue Water Security, I was always glad to help with situations like these. I tried to hire only the best, so backing them with my support was always a pleasure.

An obviously intoxicated man was pointing a finger at Lance who had to be at least six inches taller than the swaying man. “You fucking asshole! I have a ticket! You can’t keep me out!” I heard the word motherfucker and that was that. This wasn’t going to end well for the drunken ticket holder.

In my mouthpiece, I said, “Stay cool, Lance. He’s all talk,” but before I could arrive, the man took a swing at Lance. So much for my expert analysis. In one quick movement, Lance had the man’s right arm twisted behind his back, Lance’s left arm firmly around his neck in a choke hold.

I rushed to Lance’s side. The man’s open coat displayed the butt of a gun in his waistband. I jerked the .38 Special from his belt holster and turned to look him in the eyes. The combined stink of beer and whiskey oozed from him.

Adrenaline was pumping through my body as if facing a 3-2 pitch. I regained my composure before speaking in a calm, determined voice. “Sir, even with a concealed carry permit, it is illegal to bring a gun into a bar, especially when you are intoxicated.” The other patrons waiting to enter had backed away when they saw the gun. “The man with his arm around your neck is going to escort you to the office. The police will be called. I hope you have your permit with you. You can walk to the office quietly. If not, I’m certain Lance will find a way to get you there. Is that clear?”

The man nodded as best he could with Lance’s muscular arm wrapped around his neck. Lance released his stranglehold, keeping a firm grip on the man’s arm. I handed the gun to my employee. The drunk remained calm and allowed Lance to lead him away. Using my mic, I paged Jason Weaver, who had been assigned to dance floor security for the night, to come to the front door.

I remained at the door, checking tickets for the anxious concert fans, until Jason appeared. It was then I realized there was still silence coming from the sound system. The normal professionalism of Z-Rock’s staff made me wonder about the cause of the extended silence. I could imagine engineers scrambling to locate and repair whatever technical problems had occurred.

Jason arrived, assuming Lance’s position at the door. I turned back to the bar as my cell phone rang. “Glenn Beckert,” I answered.

“This is John Waner at Z-Rock.” He paused and I wondered if I was truly surprised to be hearing from my security guard at the station. His voice was high-pitched, his words rushed as he said, “There’s a big problem here.”

Cliff was born and raised in Pittsburgh, PA. Cliff’s family relocated to Northeast Ohio when he was in high school. Immediately after graduation he returned to his hometown to attend the University of Pittsburgh. Cliff planned to major in journalism and write the great American novel. Instead, he switched to Business Administration and began a 30-year career in accounting and finance.

Cliff rekindled his passion for writing acquired as a reporter for his school newspaper. He published his first novel, DEAD AIR: a Glenn Beckert Mystery in September 2017. Cliff also writes short stories. He was a winner in the Unfinished Chapters anthology in 2015. Cliff is a member of the Mystery Writers of America and Pennwriters.

This is a rafflecopter giveaway hosted by Partners in Crime Virtual Book Tours for Cliff Protzman. There will be 1 winner of one (1) Amazon.com. The giveaway begins on April 1 and runs through May 2, 2018. Void where prohibited.