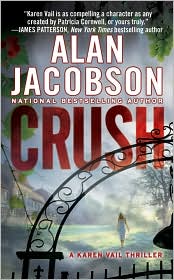 Karen Vail, the memorable heroine of The 7th Victim, faces the most dangerous serial killer of her career.

Publishers Weekly
In Jacobson’s addictive second Karen Vail thriller (after The 7th Victim), a serial killer spoils the FBI profiler’s romantic Napa Valley vacation with boyfriend Det. Robby Hernandez. During a Silver Ridge Estates winery tour, Karen and Robby stumble over the strangled and mutilated corpse of Victoria Cameron, daughter of an influential winemaker. The narcissistic psycho responsible? John Wayne Mayfield (aka the “Napa Crush Killer”), who taunts the Napa County Major Crimes Task Force formed to catch him. As more victims are found, their windpipes crushed and bodies inflicted with postmortem wounds, the motive behind such a killing spree appears connected to conflicts within the Georges Valley American Viticultural Area board. Jacobson jolts standard serial killer fare with some twists concerning the publicity-hungry Crush Killer and insightful peeks into California’s wine industry. The action culminates in a shockeroo cliffhanger.