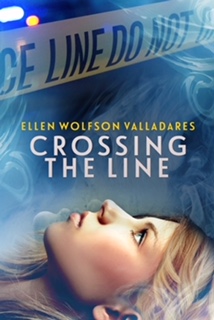 Laura, who died thirty years ago, enlists the help of a tenacious high school reporter named Rebecca, who is very much alive. Rebecca, although skeptical and conflicted by her supposed encounters with a spirit, determines to learn the truth about Laura’s tragic death. As the clues unravel and their worlds collide, Rebecca finds herself at a dangerous crossroads.

Laura, now pulled back into everything she left behind when she died – her old high school and memories of her life and death—has been in training for this exact moment. And nothing means more to her than succeeding at her assignment.

It is her one chance to make sure that what happened to her does not happen to anyone else, and especially not to her new friend, Rebecca.

The Inspiration Behind Crossing the Line

Just as Crossing the Line interweaves two worlds, I realize now that the inspiration for the story came from two worlds as well. It was a blending of true events from the “real world” and ideas that sprang from the world of my imagination.

It started about eight years ago when locally, in South Florida, there were a couple of incidents involving teens doing hurtful things to other teens. I was heartbroken and disturbed, and I thought if these kids had just taken a moment to stop and try to understand what was going on with the other person, they wouldn’t have made the rash choices they made. Ironically, I live twenty minutes away from Marjory Stoneman Douglas High School in Parkland, Florida, and once again, the headlines are breaking my heart. While the incidents eight years ago do not compare to this recent tragedy, it spoke to my soul in a similar way. As my character Danny, the professor, says, pain can be “a catalyst for change.” I guess I hoped to write a story that would change how people perceive each other and perhaps their world.

Then one day, I remember I was sitting on an airplane, the idea popped into my head that a spirit who had died would come back to make sure that what happened to her didn’t happen again. I “saw” the first scene in my mind where these girls were playing with a Ouija board and the spirit connected with them. It wasn’t going to be scary, but instead about a unique connection between the spirit and a living high school girl. I knew it would be a converging of the past and present, two stories intersecting, begging the question, could history be prevented from repeating itself? Could making a different choice end in a different outcome?

Basically, I had a beginning and an end, and I could not have imagined the twists and turns the story and its characters would take. Inspiration is a funny thing. You can’t force it. It comes when you are least expecting it and when it does, it’s undeniable. Sometimes what feels like being stuck is just a message to let it rest for a minute. I remember starting to fall asleep one night and I got a burst of ideas that were totally different than where I thought I was going with the story. I had to get up and started pacing in circles, excited about the new idea, and then, of course, had to write it down. I had a similar thing happen just walking on the beach one day. It’s like wow, yeah, that makes sense. You have to trust yourself and your characters. They know where the story is going. You just have to listen.

Ultimately, the two main characters, Rebecca, the living teen, and Laura, the spirit, became as real to me as people as I know. The Academy, the idyllic afterlife school for teens, also took on more of a life than I could have imagined.

It’s interesting and fascinating how a story and its characters develop out of a simple thought, and how the subtle messages we hope to convey get wedged between the cracks of an entertaining tale. That’s the beauty of fiction. You hope to entertain and if you’re lucky, you inspire along the way.

Ellen Wolfson Valladares is an award-winning writer/author, workshop facilitator, community volunteer, and mother. A native Floridian, she grew up in St. Petersburg and graduated with a bachelor’s degree in Journalism from the University of Florida. She has worked as an editor, public relations professional, and freelance writer. Her first book, a children’s novel entitled Jonathan’s Journey to Mount Miapu, received several awards, including a Mom’s Choice Gold Award and the 2009 Coalition of Visionary Resources Visionary Awards Book of the Year award. She also has a meditation CD, entitled “Healing and Manifestation with the Archangels.”

Today, Valladares continues to work as a freelance writer. She also enjoys coaching high school students working on their college essays and helping other writers realize their dreams. She has been married to her husband, Manny, for 30 years and they have two sons, Gabriel and Michael, two dogs, Flash and Chili Pepper, and a crazy cat named Zelda. They live in Weston, Fla.