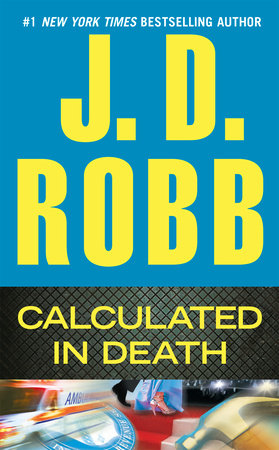 Lieutenant Eve Dallas must immerse herself in her billionaire husband Roarke’s world of big business to uncover the identity of a hit man in this thriller in the #1 New York Times bestselling In Death series.

On Manhattan’s East Side a woman lies dead at the bottom of the stairs, stripped of all her valuables. Most cops might call it a mugging gone wrong, but Lieutenant Eve Dallas knows better.

A well-off accountant and a beloved wife and mother, Marta Dickenson doesn’t seem the type to be on anyone’s hit list. But when Eve and her partner, Peabody, find blood inside the building, the lieutenant knows Marta’s murder was the work of a killer who’s trained, but not professional or smart enough to remove all the evidence.

But when someone steals the files out of Marta’s office and the killer’s violent streak begins to escalate, Eve knows she has to draw him out, even if it means using herself as bait…

Hott Review of Calculated In Death:

I LOVED Calculated In Death! It is, without a doubt, one of the best In Death novels I’ve read.

We got to see much more of Roarke’s personality in Calculated In Death. His life, his love for Eve, and his work. Learning about him was great. He’s been a character in the recent novels but they haven’t had a lot to do with him. He was just kind of a shell doing the Roarke thing.

Eve was terrific in Calculated In Death, as well. She made one of her superior super-cop moves, showed her vulnerability, and allowed us another glimpse into her fear of all things Trina. I loved it!

If you’ve not read an In Death novel, and don’t want to start at the beginning, Calculated In Death is a great place to jump in!