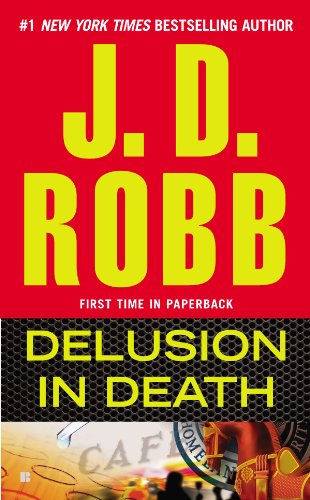 After years on the force, Eve Dallas didn’t think she could be shocked anymore… until now.

It was just another after-work happy-hour bar downtown, where business professionals unwound with a few drinks, complained about the boss, maybe hooked up with someone for the night. Until something went terribly wrong. At first it was just a friction in the air. The noise intensified. The crowd seemed oppressive. some sharp words were exchanged, some pushing and shoving.

Then the madness descended. And after twelve minutes of chaos and violence, eighty people lay dead.

Eve Dallas is trying to sort out the inexplicable events. Surviving witnesses talk about seeing things—monsters and swarms of bees. They describe sudden, overwhelming feelings of fear and rage and paranoia. When forensics makes its report, the mass delusions make more sense: it appears the bar patrons were exposed to a cocktail of chemicals and illegal drugs that could drive people to temporary insanity—if not kill them outright.

But that doesn’t explain who would unleash such horror—or why. Eve’s husband, Roarke, happens to own the bar, yet he’s convinced the attack wasn’t directed at him. It’s bigger than that. And if Eve can’t figure it out fast, it could happen again, anytime, anywhere. Because it’s airborne….

Hott Review of Delusion in Death:

Cant I start by saying EEWWW?!?! Chapter 1 was just gross… but funny. Horrifically so. I’m amazed that Ms. Robb was able to keep an experience and scene as horrifying as the one in this bar so light, give so many details to the reader without making it grotesque, and show the terror of the responders and detectives without making it dramatic. WOW. Just Wow. (And thank you!!)

Even with it’s potentially terror inducing plot, Delusion in Death is a terrific book. It’s actually one of my favorites. I loved the characters, the mystery, and the twist. But especially, I loved the team. I really enjoy watching them work together, bicker, and fight for what’s right. I love the snark. I love the camaraderie and the friendship. In Delusion in Death, especially, I felt like friendships are strengthened and bonds are built. Many were pulled in from previous books because they were trusted, it was like a reunion, and fun even in the face of such dread.

Delusion in Death is absolutely a book you could pick up without having read others in the series and enjoy, but you’ll definitely enjoy the intricacies of the characters and their personalities if you’ve started at the beginning and read through. How else could you find Eve’s snark or completely wrong phrases (check out my kindle highlights to see some of what I found most humorous!) endearing? I will say, it may be a bit difficult to follow for newbies. There are a lot of characters… 😉