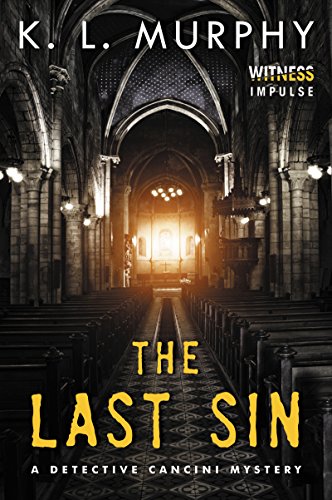 Detective Mike Cancini has seen some dark days, but his skills are put to the test when a priest is discovered, brutally murdered in a run-down church in Washington, D.C. The man who discovered the body is none other than Cancini’s longtime friend and confidant, Father Joe Rossi. The murdered priest, Father Matthew Holland, was adored by the congregation, and it seems clear that this was a crime of opportunity in a deteriorating neighborhood.

However, Cancini soon learns some shocking details from the church secretary, and begins to suspect that Father Holland was not as saintly as he may have appeared. This new information leads to a trail of bribes and decades of corruption polluting the church. Cancini must confront his own struggles with his faith and uncover the truth of the conspiracy before more people are killed.

I almost didn’t review The Last Sin. The synopsis and excerpt really pulled me but I was concerned that there would be disparaging remarks made about Christianity, God, and/or Jesus. After reading this mystery, I can honestly say I’m happy I overcame my hesitations as there was only a sentence or two I didn’t like in the entire book!

What I liked: The Last Sin is an interesting mystery that I enjoyed following.

The players and the winding investigation in a priest’s murder are extremely intriguing! The most compelling character is the priest who’s under suspicion. His internal battle between his vows and right vs wrong was so interesting and something to admire.

What I didn’t like: Although I really enjoyed reading The Last Sin, seeing the humanity and sin of a priest is a difficult thing to read. It’s not that I expect perfection, maybe I just prefer not to know.

Sunday, February 21st: The Day Of

The smell of incense lingered in the air, temporarily masking the odor of rotting wood. Father Matthew Holland inhaled. The bitter scent stung his nose. Three years had passed since he’d taken over the church and nothing had changed. Even with the increased attendance and community outreach, the church offerings remained meager. Without offerings—without money—the parish church would die.
The priest sat down on the front pew, his robes gathered around his feet. His gaze shifted to the empty pulpit. Two large and colorful plants graced the altar, but they weren’t enough to hide the worn carpet or faded paintings, nor could the soft candlelight make him forget the plywood that covered the cracked stained glass. There was so much to do, so much need. He sighed and looked to the cross over the altar. Not for the first time, he asked for forgiveness, for understanding. There would be money now—he’d made sure of that—but at what cost? He’d done it for the church. His pulse quickened and his stomach clenched. Bending forward, he forced himself to take one deep breath after another until the moment passed.
He loosened his cleric collar and yawned. The evening’s mass had been long and difficult. The drunks in the back of the church had refused to leave, in spite of the old deacons’ best efforts.
“S’our right to be here,” the man with the long, stringy hair had said. His words slurred, he’d leaned forward as though he might topple straight into the next pew. “Worshipin’ God,” he’d
said, although it had sounded like something else judging by the gasps from the congregation. The drunk had pointed a dirty hand toward the altar. “Here to see Father Holland. Tol’ us to come anytime.”
The drunk had swayed again, and his companion had reached out with a strong arm to catch him. Father Holland’s mouth had gone dry at the sight of the tattoo on the man’s forearm—a black dagger plunged into a white skull. Three drops of blood extended in a single line from the tip of the dagger to the man’s wrist. He knew that tattoo, knew what it meant.
The awkward moment had passed although not before Father Holland caught the disdain on the faces of the ladies in the choir. Still, none of the parishioners had said a word, all looking to him instead. He’d hidden his trembling hands in the folds of the heavy cassock and swallowed. “St. William is open to everyone, our members and our guests. However, since we are about to have communion, I would ask that everyone who is not singing remain quiet. Guests may come forward for a blessing, of course.” He’d been careful to keep his voice steady. Thank the Lord it had been enough. The man with the oily hair had quieted down and then stumbled out during the Eucharist. His friend with the tattoo had stayed a moment longer, then followed.
Silence filled the sanctuary now. Father Holland rubbed his hands together and shivered. He could still feel the cold eyes of the tattooed man and the curious glances from the congregation. The man’s presence at the evening mass had been no accident and no drunken whim. The message had been clear.
After the church had emptied, he’d walked to the corner market and made the call. He’d done the best he could. Money changed everything. It always did. He opened his hand and stared at the crumpled paper with the phone number. He was not a stupid man. Nothing came without a price. He murmured a prayer until his shoulders relaxed and the drumbeat of his heart slowed.
His stomach growled, the gurgling loud and rumbly, and he realized it had been hours since he’d eaten. Breaking the quiet, a sound came from the back of the church, a click and a swish as the heavy outer door swung open. He stood and smoothed his cassock. Dinner would have to wait. He strained to see, but the vestibule was dark. “Who’s there?” he asked.
The door clanged shut and heavy steps sounded on the dingy marble floor. Father Holland replaced his collar and ran his fingers through his hair. There was only silence. The hair on the back of his neck prickled. “Is somebody there?” he asked again.
A figure shrouded in black stepped out of the dark.
Father Holland stiffened. “Why are you here?”
From the shadows, the eyes of the visitor glittered in the candlelight. “I’m a sinner, Father.”
Father Holland’s shoulders slumped. “We are all sinners in God’s eyes.”

K.L. MURPHY was born in Key West, Florida, the eldest of four children in a military family. She has worked as a freelance writer for several regional publications in Virginia, and is the author of A Guilty Mind and Stay of Execution. She lives in Richmond, Virginia, with her husband, four children, and two very large, very hairy dogs.

Thank you to KL Murphy, Witness Impules, and Partners in Crime Virtual Book Tours for generously offering this book to me for review.

Plus, Check Out the Other Tour Participants:

Don’t Miss Your Chance to WIN:

This is a rafflecopter giveaway hosted by Partners in Crime Virtual Book Tours for KL Murphy and Witness Impulse. There will be 3 winners of one (1) code for a BlueFire eBook copy of The Last Sin by KL Murphy. The giveaway begins on March 13th and runs through April 16th, 2017.

4 thoughts on “Review | The Last Sin by KL Murphy”