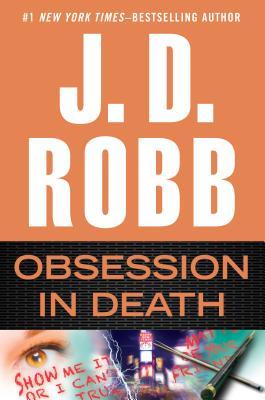 A crisp winter morning in New York. In a luxury apartment, the body of a woman lies stretched out on a huge bed. On the wall above, the killer has left a message in bold black ink:

FOR LIEUTENANT EVE DALLAS, WITH GREAT ADMIRATION AND UNDERSTANDING.

Eve Dallas is used to unwanted attention. Famous for her high-profile cases and her marriage to billionaire businessman Roarke, she has learned to deal with intense public scrutiny and media gossip. But now Eve has become the object of a singular and deadly obsession. She has an ‘admirer’, who just can’t stop thinking about her. Who is convinced they have a special bond. Who is planning to kill for her – again and again…

With time against her, Eve is forced to play a delicate – and dangerous – psychological dance. Because the killer is desperate for something Eve can never provide – approval. And once that becomes clear, Eve knows her own life will be at risk – along with those she cares about the most.

Hott Review of Obsession in Death:

Obsession in Death is a piercing look at the possibilities of hero worship… and when it goes wrong.

Being worshiped by a psychopath who wants to be your BFF isn’t all it’s cracked up to be. It’s bad enough when the zealot is killing people they believe have wronged you but when the fruitcake decides to kill your friends because they haven’t elicited justice on your behalf things get a little crazy. Or when the nutty new BFF decides you’ve fallen off of that pedestal they put you on? Well, it’s time for your true contingent to close ranks and defend their Lieutenant and friend.

I really enjoyed Obsession in Death because of the relationships and the mystery. There isn’t any gore, very little steam or language (compared to other In Death novels), and not a lot of non-department characters. It’s primarily about the hard core, redundant, systematic police work that’s so often boring but necessary. I LOVED it!! It was great to see Eve in a low-action mystery (again, compared to other in Death novels) as opposed to a thriller or suspense.

I’m not going to recommend Obsession in Death to everyone though. I don’t think it’s for those who haven’t read and enjoyed previous books in this series. I didn’t remember some of the specific cases and the vague references weren’t enough for me. While I believe, it’s definitely possible to read Obsession in Death without having read the previous books, I just don’t think you’ll enjoy it as much.