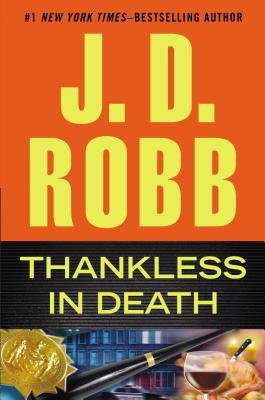 In this thriller in the #1 New York Times bestselling In Death series, Lieutenant Eve Dallas discovers that deep hatred can seethe within the closest relationships when she hunts down a man who murdered his own family.

Lieutenant Eve Dallas has plenty to be grateful for, especially Roarke’s big Irish family, which is a joyful improvement on her own dark childhood.

Other couples aren’t as lucky. The Reinholds, for example, are lying in their home stabbed and bludgeoned almost beyond recognition. Those who knew them are stunned—and heartbroken by the evidence that they were killed by their own son.

Turns out that twenty-six-year-old Jerry is not only capable of brutality but has taking a liking to it. With the money he’s stolen from his parents and a long list of grievances, he intends to finally make his mark on the world. Eve and her team already know the who, how, and why of this murder. What they need to pinpoint is where Jerry’s going to strike next.

Hott Review of Thankless in Death:

I LOVED Thankless in Death. Honestly, I think this was one of my favorite in Death novels ever!

Not only was the plot icky, scary, and just plain wrong. (Where does she come up with these things?!?!) But, it was believable scary and frustrating because there was little mystery just a lot of hide and seek.

Plus, I think my favorite part about Thankless in Death is the personal. Eve’s alternative job offer, using Roarke’s resources to when it’s important, and most of all, the little reminders about past books. It was fun to relive those moments of achievement we’ve shared with Eve and her team.