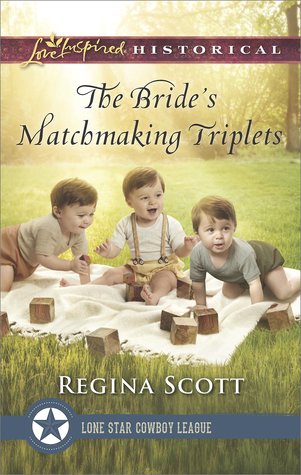 When mail-order bride Elizabeth Dumont’s intended weds another, her only option is to take a job as nanny to abandoned triplet babies. Though she longs to provide a real home for her three precious charges, as a single woman she can’t adopt. Until her onetime sweetheart, minister Brandon Stillwater, offers a match of convenience…

It’s only for the triplets’ sake–that’s what Brandon tells himself. Insecurities once drove him and Elizabeth apart, and now small-town rumors have made them man and wife. And though Brandon doesn’t want to risk his heart this time, he’s not sure he can resist the feelings that are once again starting to bloom for Elizabeth. But can he convince her that this sweet surprise family is more than just convenient?

I felt like the book’s theme was practical and applicable. I just couldn’t decide which point Ms. Scott was trying to remind me of – the evils of gossip or perseverance. Maybe a bit of both. Marrying the themes of trusting God when things aren’t grand and nullifying rumors was inspired. Truly. These reminders and this great example will be with me in the future when I’m feeling overwhelmed or prone to chatter.

I will admit, even as I neared the end of The Bride’s Matchmaking Triplets I was thrown off by the number of characters I needed to keep straight. I had met some previously in A Rancher of Convenience but they still were staggering. I think I may need to grab a few more in the series to get my head straight! 😉

Regina Scott is a devout Christian and a decent fencer; owns a historical, fantasy, and science fiction costume collection that currently takes up over a third of her large closet; and has been known to impersonate an independent consultant specializing in risk communication.

One thought on “Review | The Bride’s Matchmaking Triplets”