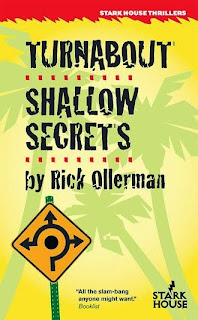 Remember those old Ace paperbacks, with two actioners in one volume? Stark House is reviving them, with the current offering holding all the slam-bang anyone might want.

In Turnabout, ex-cop Frankie O’Neil is skeptical when a friend’s death is ruled a suicide. He uncovers a crime unknown to the Ace masters: computer theft. These crooks have friends with guns, and halfway along the novel becomes a series of cliffhangers that hit another memory: movie serials. Will Frankie escape in time? Find out in the next chapter. You won’t stop until you know.

Shallow Secrets moves slower, with a subtext: the power of chance to provoke horrors, then avenge them. Cop James Robinson doesn’t just know the accused killer. They’re roommates. The coincidence ruins his career. Then there are fresh killings, and Robinson is “a person of interest.” Near the end, Robinson almost tells a woman that “there wasn’t anything they could do to make the world safe” from murders. But coincidence can bring them down, as when someone sees something he’s not supposed to. 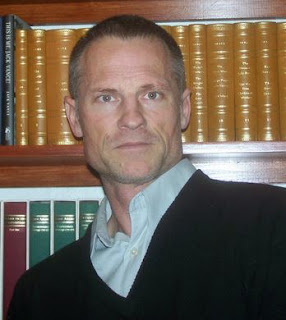 Rick Ollerman made his first dollar from writing when a crossword magazine printed a question he’d sent. Later he went on to hold world records for various large skydives, appear in photo spreads in LIFE magazine and The National Enquirer, can be seen on an inspirational poster during the opening credits of a popular TV show, and has been interviewed on CNN. He also had a full-screen shot as an extra in the film Purple Rain. His writing has appeared in technical and sporting magazines and he has edited and proofread many books, and written introductions for a dozen more. Notably in 2014 he sold a short story and an essay to Noir Riot and his first two books, Turnabout and Shallow Secrets, were published by Stark House Press in September.

This is a giveaway hosted by Partners In Crime Virtual Book Tours for Rick Ollerman. There will be three winners of 3 sets of – 1) Signed book plus a 2) signed, limited chapbook of two essays on paperback original writers that served as introductions to other books. The giveaway begins on Feb 28th, 2015 and runs through April 3rd, 2015.
a Rafflecopter giveaway