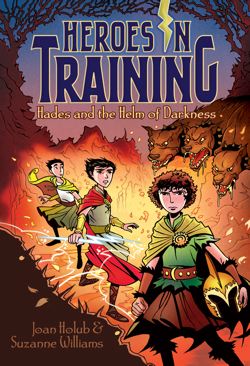 The Heroes in Training are entering the Underworld—if Hades can conquer his canine fears, that is.

The Underworld usually isn’t really meant to be a fun place—but tell that to Hades! He loves the dark and the stinky smell of sulfur. However, there is one thing that Hades is not a fan of: dogs. And when Zeus and his fellow Olympians encounter Cerberus—a snarling, three-headed dog—Hades must conquer his fears and tame the hound so everyone can continue into the Underworld and deposit their Titan prisoner, Oceanus, back where he belongs!

But with magical water that causes forgetfulness, hot beds of lava, and another epic battle with two more Titans standing in their way, will Zeus and his heroes make it out of the Underworld with everyone intact?

Suzanne Williams is the award-winning author of nearly 40 books for children, from picture books and easy readers to chapter books and middle grade fiction series. A former elementary school librarian, she lives near Seattle. Her picture book Library Lil (illustrated by Steven Kellogg) won the New Mexico children’s choice award in 2000 and was on several other state award lists. She is co-author (with Joan Holub) of the popular Goddess Girls series(for ages 8 – 12) and Heroes in Training (ages 6 – 11). Other series include Fairy Blossoms and Princess Power.

I graduated from college in Texas with a fine arts degree, and then freelanced as an art director at a graphic design firm for eight years. I dreamed of working in children’s books, so I moved to New York City and became associate art director in Scholastic trade books, where I designed books for children and worked with editors and illustrators. It was a great job.

I illustrated my first published children’s book in 1992 and soon began illustrating full time. I began completing manuscripts and mailing them out to publishers in the early 1990s. In 1996, I sold my first two manuscripts — Boo Who? A Spooky Lift-the-Flap Book (Scholastic) and Pen Pals (Grosset & Dunlap). Yippee!

Now I write full time and have written and/or illustrated over 130 children’s books. Creating books that entertain, inform, and interest children (and me) is a fabulous job that I truly love.

Thank you to Suzanne Williams, Joan Holub and Book Blast Tours for stopping by today.
If you’d like to join in on an upcoming tour just stop by their sites and sign up today!