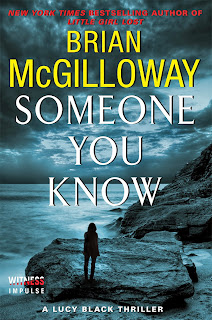 Lucy Black must protect the young and vulnerable…but can she protect herself? Late December. A sixteen-year-old girl is found dead on a train line. Detective Sergeant Lucy Black is called to identify the body. The only clues to the dead teenager’s last movements are stored in her mobile phone and on social media – and it soon becomes clear that her ‘friends’ were not as trustworthy as she thought. Lucy is no stranger to death: she is still haunted by the memory of the child she failed to save, and the killer she failed to put behind bars. And with a new boss scrutinizing her every move, she is determined that – this time – she will leave no margin for error. Hurt is a tense crime thriller about how, in the hands of a predator, trust can turn into terror.

“Cleverly constructed, packed with vibrant and believable characters…It confirms him as one of the most original voices in the notably expanding field of Irish crime fiction.” (Irish Independent).

“Assured and grittily realistic tale from an author who is being compared to James Lee Burke and Ian Rankin.” (Sunday Business Post).

Brian McGilloway is the bestselling author of the critically acclaimed Inspector Benedict Devlin series. He was born in Derry, Northern Ireland in 1974. After studying English at Queen’s University, Belfast, he took up a teaching position in St Columb’s College in Derry, where he is currently Head of English.

His first novel, Borderlands, published by Macmillan New Writing, was shortlisted for the CWA New Blood Dagger 2007 and was hailed by The Times as ‘one of (2007’s) most impressive debuts.’ The second novel in the series, Gallows Lane, was shortlisted for both the 2009 Irish Book Awards/Ireland AM Crime Novel of the Year and the Theakston’s Old Peculier Crime Novel of the Year 2010. Bleed A River Deep, the third Devlin novel, was selected by Publishers Weekly as one of their Best Books of 2010.

Brian’s fifth novel, Little Girl Lost, which introduced a new series featuring DS Lucy Black, won the University of Ulster’s McCrea Literary Award in 2011 and is a No.1 UK Kindle Bestseller. The follow-up novel, Hurt, will be published in late 2013 by Constable and Robinson.

Brian lives near the Irish borderlands with his wife, daughter and three sons.

To Sign up either complete the linky with your Blog Name, book format, requested date(s) and how you’d like to host or email me at gina at partnersincrimetours.net. Thank you for your interest in this tour.

2 thoughts on “Showcase | Someone You Know”