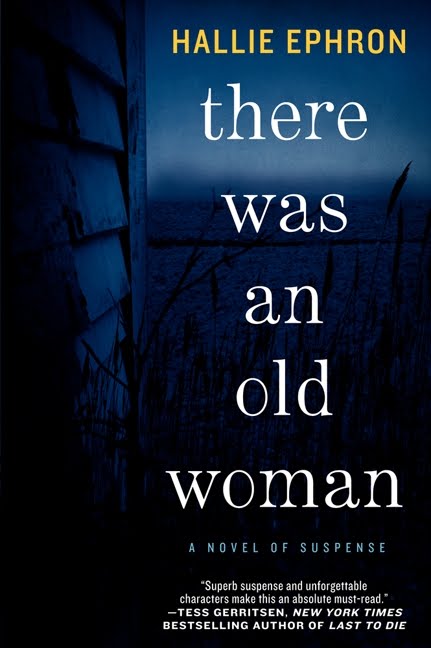 There Was An Old Woman by Hallie Ephron is a compelling novel of psychological suspense in which a young woman becomes entangled in a terrifying web of deception and madness involving an elderly neighbor.

When Evie Ferrante learns that her mother has been hospitalized, she finds her mother’s house in chaos. Sorting through her mother’s belongings, Evie discovers objects that don’t quite belong there, and begins to raise questions.

Evie renews a friendship with Mina, an elderly neighbor who might know more about her mother’s recent activities, but Mina is having her own set of problems: Her nephew Brian is trying to persuade her to move to a senior care community. As Evie investigates her mother’s actions, a darker story of deception and madness involving Mina emerges.

In There Was an Old Woman, award-winning mystery author Hallie Ephron delivers another work of domestic noir with truly unforgettable characters that will keep you riveted.

Mina Yetner sat in her living room, inspecting the death notices in the Daily News. She got through two full columns before she found someone older than herself. Mina blew on her tea, took a sip, and settled into her comfortable wing chair. In the next column, nestled among dearly departed strangers, she found Angela Quintanilla, a neighbor who lived a few blocks away.

Angela had apparently died two days ago at just seventy-three. After a “courageous battle.” Probably lung cancer. When Mina had last run into Angela in the church parking lot, she’d been puffing away on a cigarette, so bone thin and jittery that it was a miracle she hadn’t shaken right out of her own skin. Mina leaned forward and pulled from the drawer in her coffee table a pen and the spiral notebook that she’d bought years ago up the street at Sparkles Variety. A week after her Henry died, she’d started recording the names of the people she knew who’d taken their leave, beginning with her grandmother, who was the first dead person she’d known. Now four pages of the notebook were filled. Most of the names conjured a memory. A face. Sometimes a voice. Sometimes nothing—those especially upset her. Forgetting and being forgotten terrified Mina almost more than death.

Mina found lists calming, even this one. These days she couldn’t live without them. Some mornings she’d pick up her toothbrush to brush her teeth and realize it was already wet. She kept her Lipitor
in a little plastic pillbox with compartments for each day of the week, though sometimes she had to check the newspaper to be sure what day it was.

Now she started a new page in the notebook. At the top she wrote the number 151, Angela’s name, and the date, then she opened the drawer to tuck the notebook back in. There, in the bottom of the
drawer, were her sister Annabelle’s glasses. Mina picked them up.

The narrow white plastic frames had seemed so avant-garde back in the 1960s when Annabelle had decided she needed a new look. She’d worn them every day since. It was probably time—good
heavens, past time—to throw them away, along with Annabelle’s long nightgowns, flowered cotton with lovely lace collars that she used to order from the Nordstrom catalog. Mina preferred short gowns that didn’t get all twisted around her legs when she turned in her sleep.

It was odd, the things one could and couldn’t throw away. She’d kept Henry’s New York Yankees cap, the one he’d worn to Game 5 of the 1956 World Series when Don Larsen pitched a perfect game in Yankee Stadium, and she wasn’t even a baseball fan.

And then there were the things you had no choice but to carry with you. She touched the side of her face, feeling the scar, raised numb flesh that started at her cheekbone and ran down the side of
her neck, across her shoulder blade, and down into the small of her back. Mina tucked Annabelle’s glasses back into the drawer along with her catalog of the dead. She picked up her cane and stood carefully.

What she really didn’t need was to fall again. She already had one titanium hip, and she had no intention of going for a pair. She knew too many people who went into a hospital for a so-called
routine procedure and came out dead.

She carried her tea outside to the narrow covered porch that stretched across the back of the house. After an icy, miserable winter and a soggy spring, it was finally warm and dry enough to sit outside. Her unreplaced hip ached, and the old porch glider screeched an appropriate accompaniment as Mina settled into the flowered cotton cushions she’d sewn herself. She took off her glasses to rub the bridge of her nose, and the world around her turned to a blur. She was legally blind without her glasses, but she’d been secretly relieved when the doctor told her she was far too myopic for that laser surgery everyone talked about.

“Oh, shush up,” she said when Ivory gave a plaintive mew from inside the storm door. “You know you’re not allowed out here.”

She put her glasses back on, and the porch and the marsh beyond snapped into focus. Mina rocked gently, taking in the view from Higgs Point, across the East River and Long Island Sound, and on to the Manhattan skyline. As a little girl, she’d watched from this same spot behind the house where she’d lived all her life as, one after the other, Manhattan’s skyscrapers had gone up. When the Chrysler Building poked its needle nose into the sky, she’d imagined that her bedroom was in the topmost floor of its glittering tiara. Then up went the Empire State, taller and without all that frippery at the top. It had been a dream come true when Mina, single “still” (as her mother so
often reminded her) and just out of school, got her first job there. Mina remembered wearing a straight skirt with a kick pleat, a peplum jacket, a crisp white collared shirt, and a broad-brimmed
lady’s fedora that dipped down in the front and back, thinking that was all it took to make her look exactly like Ingrid Bergman. Movies, the war, and where you could find cheap booze were all anyone talked about in those days.

Two years later, the dream turned into a nightmare. For years after, the roar of an airplane engine brought the memory back, full force, and yet there she had been living and there she remained, right in the flight path of LaGuardia Airport. It was only after the long days of even more terrifying silence after 9/11 that the waves of sound as airplanes took off, one after the other, had become reassuring. All is well, all is well, all is well.

Right now, what she heard was a buzz that turned into a whine, too high pitched to be an airplane. Probably Frank Cutler, her across-the-street neighbor. Installing marble countertops or a hot tub. Making a silk purse or . . . what was it they called it these days? Putting lipstick on a pig.

At least he wasn’t rooting around in her trash or practicing his golf swing again. The last time she’d asked him to please, please stop using her marsh as his own personal driving range, he’d grinned at her like she’d cracked a particularly funny joke.

“Your marsh?” he’d said. Then added something under his breath. And when she politely asked him to repeat what he’d said, he told her to turn up her hearing aid. Ha, ha, ha. Mina’s eyesight might be fading, but her hearing was as sharp as it had ever been. The buzz grew louder. Perhaps he was using a band saw. When he got around to adding dormers to the second floor, maybe he’d find the front tooth she’d lost playing under the eaves with Linda McGilvery when they were five years old. Linda, who’d been fat and not all that bright but awfully sweet, and who’d died of leukemia, what, at least forty years ago, though it still seemed impossible to Mina that she could remember so clearly something that happened so long ago. Insidious disease. Mina had been a bridesmaid at Linda’s wedding. Awful dress—The sound morphed into a whinny, and then into whap-whap-whap, yanking Mina from a billow of pink organza. It was a siren, not a saw. And it was growing louder until she knew it had to be right there in her neighborhood. On her street.

As Mina hurried off the porch and up the driveway, the sound cut off. An ambulance was stopped in front of the house next door, its lights flashing a mute beacon. Sandra Ferrante lived in that house,
alone for the past ten years since her daughters moved out. Two dark-suited EMTs jumped out of the ambulance and hurried across grass that hadn’t been mowed in months, pushing their way past front bushes that reached the decaying gutters and nearly met across the front door.

A third EMT—a man in a dark uniform who nodded her way—opened the back doors of the ambulance, unloaded a stretcher, and wheeled it up to the house. Had the poor woman finally managed to kill herself? Because as sure as eggs is eggs, drinking like that was slow suicide.

Mina stood there, hand to her throat, waiting. Remembering the ambulance that had arrived too late for her Henry. It didn’t seem possible that that had been thirty years ago. He’d died in his sleep. By
the time she’d realized anything was wrong, he was stone cold. Still, she’d called frantically for help, as if the medics who arrived could restart him like a car battery. A massive pulmonary embolism, the doctors later told her. Even if he’d suffered it at the hospital, they said, he wouldn’t have survived. That was supposed to make her feel better. Finally Sandra Ferrante was wheeled out. A yellow blanket was mounded over her. Mina found herself drifting closer, trying to overhear.
Was she alive? Coherent?

Sandra lifted her head and looked right at Mina. She raised her hand and signaled to her. Asked the EMT to wait while Mina made her way over.

Up close now, Mina could see that the whites of her neighbor’s watery eyes were tinged yellow, and she could smell the sour tang of sweat and urine mixed with cigarette smoke.

“Please, call Ginger,” Sandra said. Ginger? Then Mina remembered. Ginger was one of the daughters.

Too late, Mina realized Sandra was whispering a phone number. Mina tried to repeat the numbers back, but they wouldn’t stick. The EMT pulled out a notebook, wrote the numbers down, tore out the
page, and handed it to Mina. She’d also written Bx Met Hosp and underlined it. Bronx Metropolitan Hospital.

An award-winning mystery reviewer, Hallie Ephron is the author of Never Tell a Lie (a Mary Higgins Clark Award finalist that was also made into the Lifetime Movie Network film And Baby Will Fall) and the Edgar- and Anthony Award-nominated Writing and Selling Your Mystery.
Ephron lives near Boston.

Thank you to Harper Collins, Hallie Ephron and Partners in Crime Virtual Book Tours for generously offering this book to me for review.
If you’d like to join in on an upcoming tour just stop by their sites and sign up today!
Categories :

23 Replies to “Showcase: There Was an Old Woman”