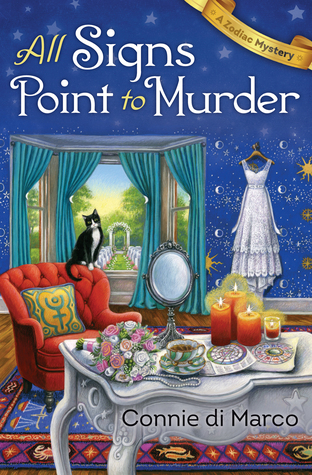 Rob Ramer was the perfect husband until he committed the ultimate family faux pas — he shot his sister-in-law to death. Believing himself under attack by an intruder in his home, he fired back. But when evidence is discovered that Rob’s wife, Brooke, was plotting his murder, Brooke is charged with conspiracy in her sister’s death. Geneva, a third sister, is desperate for answers and seeks the help of her friend, San Francisco astrologer Julia Bonatti.

Geneva’s lost one sister and now it seems she’ll lose the other.

Was this a murder plot or just a terrible accident?

Julia vows to find the answer in the stars.

Being a good friend shouldn’t be cause for murder.

I’ve always thought being helpful was good but after reading this second Zodiac Mystery, I’m not so sure anymore! Julia is a great character. She’s a good friend who puts herself out there for her friends and clients. Unfortunately, for the second time, it doesn’t lead to a safe and peaceful life for her.

All Signs Point to Murder is a really good book. I enjoyed the characters, even when I didn’t like them or what was happening they were realistic. The mystery was plausible and interesting. Plus, Julia ended up in some tight spots that were a bit tense.

I really appreciate that this is PG. There’s no steam, no gore, and only one or two curse words (actually less than in some middle-grade books I’ve read! ). It’s nice to be able to read and recommendation a secular book that’s appropriate for all.

All Signs Point to Murder is a wonderful mystery I was thrilled to spend the day with. This series is on my must -read list.

This is a rafflecopter giveaway hosted by Partners in Crime Virtual Book Tours for Connie di Marco. There will be 1 winner of one (1) Amazon.com Gift Card AND 2 winners of one (1) eBook copy of All Signs Point to Murder. The giveaway begins on July 21 and runs through August 24, 2017.

The building on Guerrero was a once proud Victorian with bow front windows. It had since been broken up into six small units and fallen into disrepair. I drove around the block several times before I managed to find a parking spot a few doors down. The shops on the main street were long closed and the streets deserted. I shivered and let the car heater run another minute to warm up before I left the comfort of my little metal box. There was something about this chore that made my stomach go into knots. Rummaging through a dead woman’s possessions was bad enough, but what if I found something that implicated Moira in a crime? Should I remove it and risk the police finding out?
I climbed out of the car, careful to lock it and approached the long stairway leading to the front door. The wind had died down and now fog danced around the streetlights. It was eerily quiet. No lights shone from any of the windows. I hoped all the residents were safely tucked up in their beds by now. I climbed the cracked granite stairs to the entrance. The weathered door stood ajar, listing slightly on its hinges. I grasped the handle and twisted it, but the lock mechanism was out of commission. Inside, a bare overhead light bulb hung from a chain. It cast a meager glow down the long corridor, cannibalized from a once grand entryway. The hallway smelled of dirty cat litter, moldy vegetables and cigarette smoke. I followed the corridor to the end, and stopped at the last door on the right.
I slipped the key into the lock. It offered no resistance. The door opened immediately. Had it not been locked? I caught a slight scuffling sound and cringed. I hoped no furry long-tailed creatures were waiting inside for me. I reached around the doorway and felt along the wall. My fingers hit the switch. A rusting chandelier with two bulbs missing illuminated the one large room that was both Moira’s living room and bedroom. I tested the key with the door open, locking and then unlocking it. Now I felt the resistance. The door had definitely been unlocked. I stepped inside and shut it behind me, making sure the lock was secure. Was it possible someone had been here before me and left without locking the door? Or had Moira simply been careless?
I had to make sure I was alone in the apartment. There were no hiding places in this sparsely furnished room. I checked under the bed just to be sure and opened the closet, terrified that someone or something might jump out at me. The closet was narrow, filled with a jumble of clothing, half on the floor. I walked into the kitchenette and spotted a doorway that led to the back stairs and the yard. I tested the handle on the door. Locked. I checked the space between the refrigerator and the wall, and then the shower stall in the bathroom. I was alone. I had been holding my breath and finally let it out in a great sigh.
I started with the drawers in the kitchen and checked the counter, looking for any notes with names or phone numbers. There was nothing. The kitchen was surprisingly clean, as if Moira had never used the room. Inside the refrigerator were a few condiments, a half-eaten unwrapped apple and a loaf of whole wheat bread. I quickly rummaged through the drawers and the freezer to make sure there were no bundles of cash disguised as frozen meat.
The main room housed a collection of hand-me-downs and broken furniture, ripped curtains and piles of clothing in various spots around the floor. Had she really lived like this? I heaved up the mattress, first on one side and then the other, making sure nothing was hidden between it and the box spring. Under the bed, I spotted only dust bunnies. I pulled open each of the bureau drawers, checked their contents and pulled them all the way out to make sure nothing was behind them. I opened a small drawer in the bedside stand. Amid a loose pile of clutter was a dark blue velvet box embossed with the letter “R” in cursive gold script. Could this be from Rochecault? I was fairly certain it was. Rochecault is an infamously expensive jeweler on Maiden Lane downtown. How could Moira have shopped there? Was this what Geneva had meant when she said her sister seemed to have a lot of money to spend?
I opened the box and gasped. An amazing bracelet heavy with blue stones in varying colors rested inside. The setting had the slightly matte industrial sheen of platinum. Moira couldn’t possibly have afforded this. Shoving the box into a side pocket of my purse, I decided I was definitely not leaving this for the police to find, and slid the drawer shut.
I scanned the room. Moira hadn’t been much of a housekeeper and it didn’t appear as if there were many hiding spots. I headed for the desk, a rickety affair with two drawers and a monitor on top. I clicked on the hard drive and waited a moment. The monitor came to life and asked for a password. It would take someone much more talented than I to unearth its secrets. Under a jumble of papers and unopened bills, my eye caught a small black notebook. This looked promising. Perhaps it was an address book that would give us all of Moira’s contacts. I dropped my purse on the floor and reached for the book. A searing pain shot through my skull. Blinded, I fell to the floor. 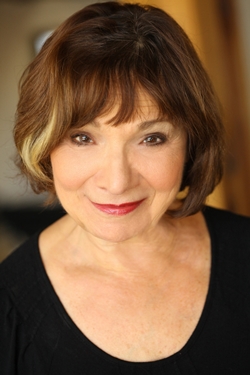 Connie di Marco is the author of the Zodiac Mysteries from Midnight Ink, featuring San Francisco astrologer, Julia Bonatti. The first in the series, The Madness of Mercury, was released in June 2016 and the second, All Signs Point to Murder, available for pre-order now, will be released on August 8, 2017.
Writing as Connie Archer, she is also the national bestselling author of the Soup Lover’s Mystery series from Berkley Prime Crime. Some of her favorite recipes can be found in The Cozy Cookbook and The Mystery Writers of America Cookbook. Connie is a member of International Thriller Writers, Mystery Writers of America and Sisters in Crime. 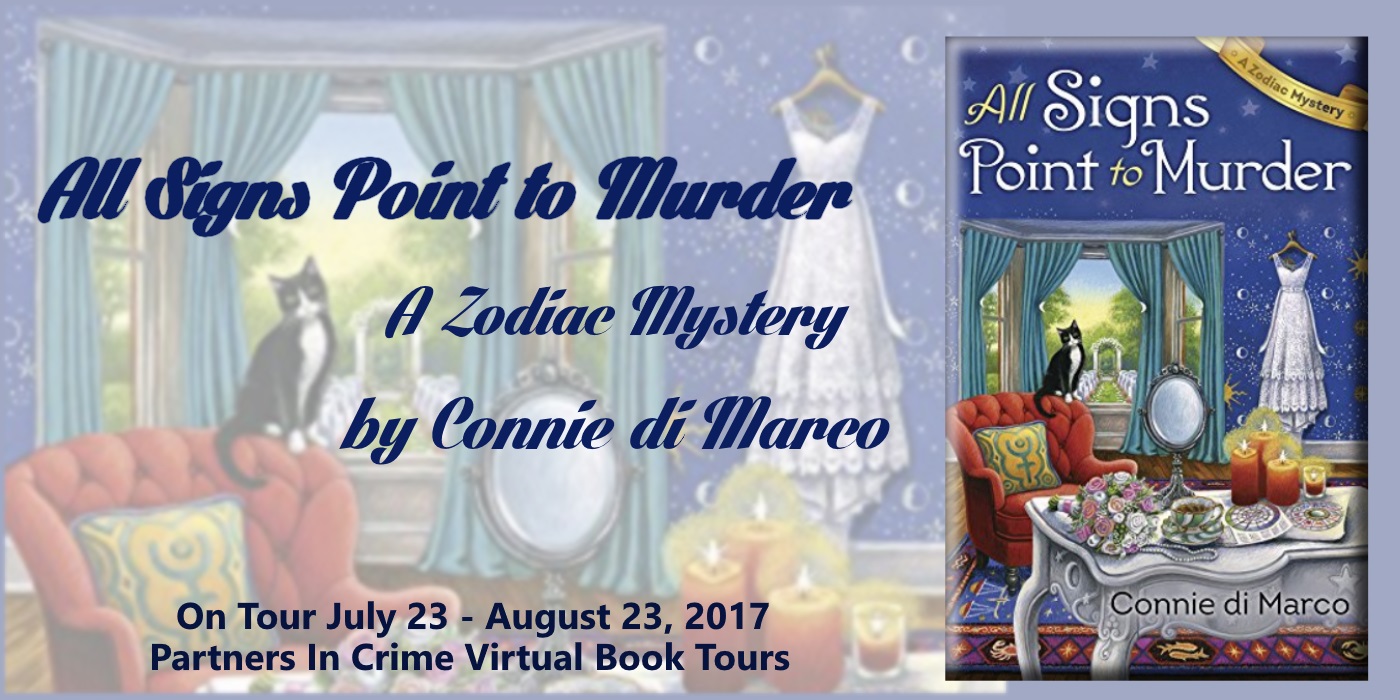 Thank you to Connie di Marco and Partners in Crime Virtual Book Tours for generously offering this book to me for review.
If you’d like to join in on an upcoming tour just stop by their sites and sign up today!