Dark Side of Sunset Pointe 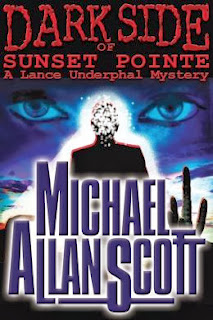 Lance Underphal was devastated by his wife’s death, and now, the down-and-out crime-scene photographer can’t let her go. He wakes up plagued by premonitions. The double shooting of an Arizona real estate developer and his mistress/bookkeeper immerse Underphal in a world of incomprehensible phenomena.
Frank Salmon, the homicide detective on the case, does his best to blow off Underphal’s “visions.” But the murders keep piling up and the visions are all too real.
Salmon pursues Underphal’s clues from a popular strip club to a failing community bank, adding a blackmailing stripper to the body count.
Underphal struggles mightily with his psychic curse, teetering on the brink of insanity. His only hope for redemption is the voice in his head, the voice of his dead wife. Stumbling through dark vortexes of murderous intrigue, he comes to realize his visions will either kill him or lead to the capture of a killer—maybe more than one.

Whiting runs a trembling hand through thinning hair, his scalp hot and moist. They’ve got to do something about these numbers. Short stubble on raw cheeks twitches as he anxiously works his jaws. They could lose the whole damn project. Thirty million! He can’t believe it, he’s bet everything on this project. And with the hard-money loan, they’ve got a bigger nut than ever. Shit! Those hard-money bastards, they’re Rodriguez’s contacts. Of course they had to have the money to finish—all the construction cost overruns. Fucking Rodriguez. His fingers manically drum on the hardwood desktop, their nails ragged, bitten to the quick. They’re in way too deep to quit now.
Chewing his bottom lip, Whiting redials Rodriguez’s cell.
Rodriguez sounds out of breath, frustrated. “Damn Gary, whaddaya want?”
“Mike, we need to go over some numbers. Ya got a minute?”
Rodriguez gives a short chuckle then lowers his voice, “I’m kinda in the middle of somethin’.”
“Yeah, but . . .” Gary hears a thump, then a woman’s muffled words. “Hey, are you at the office? Who’s with you?”
“Yeah, like I said, we’re kinda in the middle of somethin’ here.”
Whiting hears giggling in the background.
To Diane, Rodriguez says, “Stop that.” To Gary, he says, “Diane’s never done it on the desk before.”
Whiting can almost hear Rodriguez’s leering grin.
In the background Diane laughs then says, “Do I get overtime for this?”
Now they’re both laughing.
“Damn . . . Mike, you guys . . . in the office?”
“Hey, don’t sweat it. It’s almost seven, no one’s around, yard gates are locked, lights are off. No one’s gonna know.”
Whiting hears Diane coo and then more giggling.
Rodriguez speaks closer into the phone, “That is, as long as you keep your mouth shut.”
“Hey, no problem. I don’t care what you do with Diane. She’s your bookkeeper.”
Diane lets out a short yelp and says “What was that?”
“Shit!” Rodriguez whispers, “Shit.”
“Mike, what’s going on?”
“Hold on, I think someone’s here.”
Whiting hears grunting, rustling, probably scrambling for clothes, the metallic snap of window blinds.
Under his breath, Rodriguez says “Who’s that?” He whispers to Diane, “Get your panties on.”
Whiting hears Diane whine, “I’m trying.”
He hears Rodriguez whispering to himself, “Who is that? Is that . . ? I’ll get that bastard.”
Rodriguez says, “Gary, hold on, I gotta take a picture with this thing, hold on.”
“Okay.” Whiting hears the blinds clacking.
He hears Rodriguez talking to himself, “Damn, it’s dark . . . but I think I got ‘em.”
“Mike . . . Mike?”
“Yeah, I’m back, hold on. Gotta check this out.”
Whiting clutches the phone in a sweaty hand, pressed hard against his ear. He hears a loud bang. A door slamming the wall? Too weird. He needs a Valium.
Diane screams. Rodriguez yells, “You, you asshole! What the fuck do you want!?!”
Whiting hears POP, POP! Screeching, a low grunt, loud thumps . . . POP, POP, POP! “Uh, uh, uh . . .” Guttural gasps. A long wail. High-pitched keening, its otherworldly echo raising every hair on goose flesh. Whiting drops the receiver, horrified. The plastic handset bounces off the desktop as it sinks in. They’ve been shot! 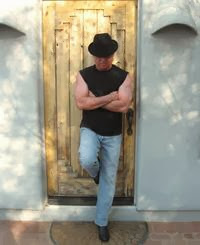 Born and raised at the edge of the high desert in Kingman, Arizona, Michael Allan Scott resides in Scottsdale with his wife, Cynthia and their hundred-pound Doberman, Otto. In addition to writing mysteries and speculative fiction, his interests include music, photography, art, scuba diving and auto racing. For the latest, please visit http://michaelallanscott.com.

“Scott crafts an intriguing hook and a sympathetic protagonist in a world that, while seemingly depraved and dark, is clearly recognizable and believable. A well-built mystery . . .”
Kirkus Reviews

To Sign up either complete the linky with your Blog Name, book format, requested date(s) and how you’d like to host or email me at gina at partnersincrimetours.net. Thank you for your interest in this tour.