Play | YouVersion | Connect
Where does God’s Word fit in a gaming world? “Right in the middle of it!” says Tyndale House Publishers and Scarlet City Studios. The two organizations have formed an exciting partnership to bring the gospel story to young gamers. Tyndale’s new Aetherlight Bible releases this summer and is built around themes from the new action-adventure online game The Aetherlight: Chronicles of the Resistance.

“Tyndale House grew out of the efforts of Dr. Kenneth Taylor as he worked to make God’s Word accessible to his children,” said Blaine A. Smith, associate publisher at Tyndale House Publishers. “For over fifty years, Tyndale has been focused on providing innovative ways for people to connect to God’s Word. This new partnership with Scarlet City Studios enables us to engage children in a game environment with the truth of Scripture. We are excited to join with Scarlet City Studios to create this Bible and help parents engage with their kids in an environment they understand.”

The Aetherlight: Chronicles of the Resistance is the first digital engagement experience of its kind. The Entertainment Software Association reports that 59 percent of Americans play video games and more than 50 percent of US households have at least two gaming consoles. In only four years the gaming industry has seen an increase in sales of more than 200 percent. The Aetherlight game aims to help young people see their stories in the context of God’s story via a world that is grounded in the biblical narrative. The companion Bible will help families build upon the bridge between the game’s allegory and the words of Scripture. Through different media forms, Tyndale House Publishers and Scarlet City Studios are bringing God’s Word into this unique market. 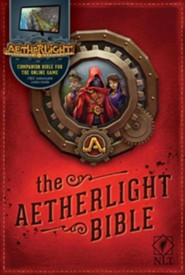 “The Aetherlight: Chronicles of the Resistance is more than a game,” said Tim Cleary, Scarlet City Studios’ Aetherlight world builder. “It’s an immersive experience that, carefully balancing theology and theatrics, brings to life the biblical narrative for a digital generation. It connects Scripture and real-life application through the world of Aethasia as a high-quality, state-of-the-art game that allows players to experience the mission of God in Scripture for themselves. It’s fantastic, then, to be able to offer a physical, tactile Bible to match this rich experience.”

Join the Resistance today, and play the online game!

I’m not a video game advocate. It honestly annoys me when I see my kiddos… teens… sitting at their screens playing instead of outside or reading. However, when I saw that Tyndale released a game with a companion devotional and bible I have to admit to being intrigued. Before I even opened the link though, I sent it to my kids. After several conversations – they were concerned because they had to download the game – they both began to play… and play.
While they both enjoyed the game itself, because it’s “a good game”, I really liked that The Aetherlight: Chronicles of the Resistance is age appropriate, is an adventure, and that it features the standards and decisions we each make as Christians.
Though I’ll never be okay with a ton of screen time, if my kids are playing The Aetherlight: Chronicles of the Resistance I think I’ll make an exception.