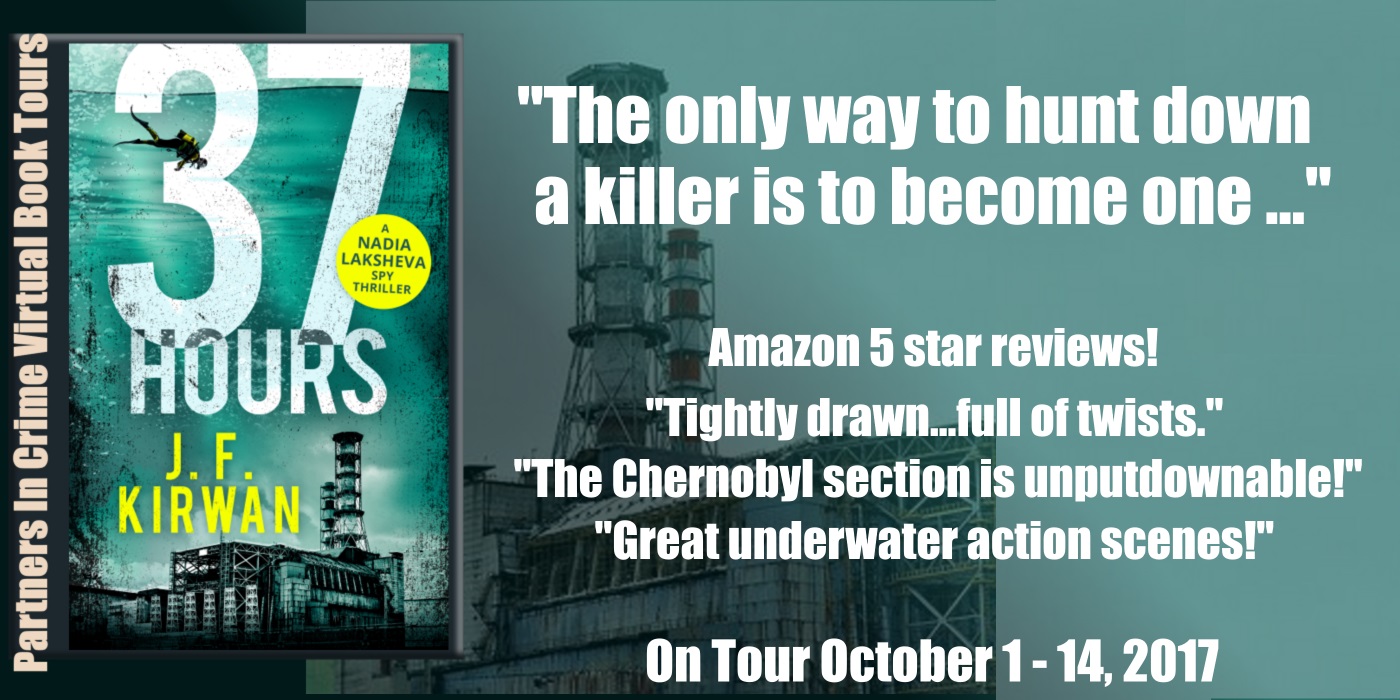 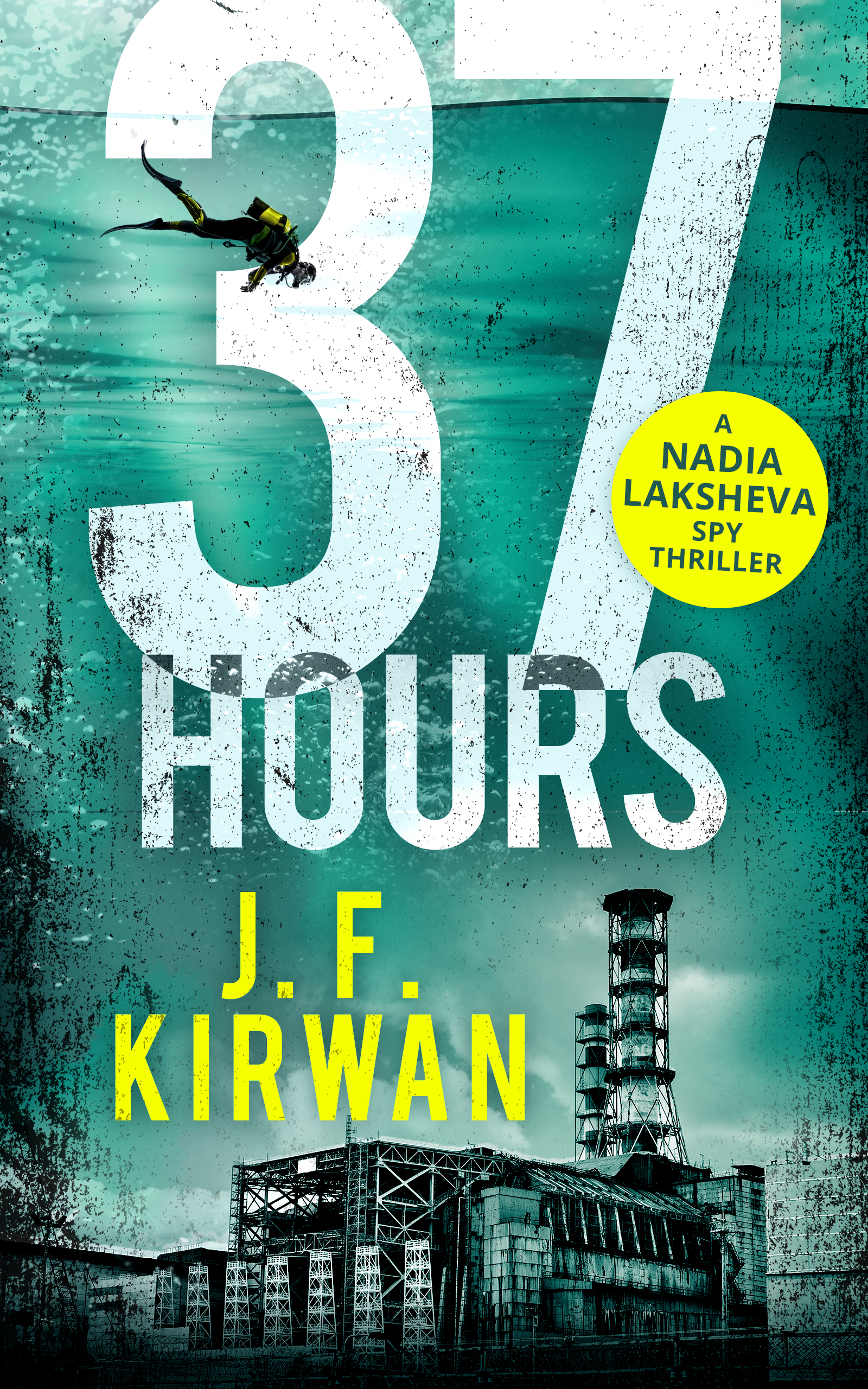 Imprisoned by MI6 for two long years in solitary, Nadia suddenly finds herself free again. But there is a price to pay for her release. Another dangerous and near impossible mission – retrieve the Russian nuclear warhead stolen by her old nemesis, the deadliest of terrorists.

But he is always one step ahead, and soon Nadia finds herself at the front line of preventing London from disappearing into a cloud of ash. Only this time, she is ready to pull the trigger at any cost.

And with the clock counting down from 37 hours, time is running out…

Vladimir was cuffed and hooded, but his guards had made a fatal mistake. His hands were behind him, but not attached to the inner structure of the military van, a standard Russian UAZ 452 – he’d know those rickety creaks and the pungent blend of oil and diesel anywhere. The vehicle trundled towards some unknown destination where he would be interrogated, beaten some more, then shot in the back of the head.

Three of the four men chattered as they picked up speed down a straighter road. Their second mistake. Clearly they weren’t Special Forces – Spetsnaz – like he’d been until recently. They were regular army. He’d only seen the two heavies who’d snatched him from breakfast with his daughter. Now he knew there were four – one other had engaged in the banter, another had remained silent but was referred to as the butt of several bawdy jokes. The hierarchy of the men was also clear. The leader was in the front passenger seat, the silent one the driver, leaving the two musclemen in the back with him.

He waited. They’d been driving for an hour or so, initially dirt tracks, now a highway, which meant they were on the E119 to Vostok. If they turned right, he had a chance, as they would have to cross the Volga River. Then he would make his move.

If they turned left, he was a dead man.

Vladimir wasn’t one for options, or for hedging his bets. Not a question of making the right choice, but of making the choice right. In all his missions he’d never cared much for a Plan B. Leave too many options open, and events control you. You invite failure.

The van would turn right.

Vladimir mapped the van inside his head. The van layout was standard: two seats in the front facing forward, two benches in the back facing each other. Two front doors on the driver and passenger side, a double door at the rear. He was on the left-side bench, a heavy beside him, one opposite. The leader was in the left-hand front seat, the driver on the right. He needed to know if there was anything between him and the driver, in front on the opposite side, such as a vertical strut, or a metal grill. Because if there was either of those things, his plan wouldn’t work.

Nobody had talked to him since his arrest. Why talk to a hooded, dead man? But they were military, or at least they had been at one stage or another, so it should work. He waited for a pause in their talk fuelled by bravado – they were probably wondering which one of them would get to pop him in the skull. He reckoned they’d make the driver do it. A rite of passage. Probably a rookie, not yet blooded.

‘Cigarette?’ he asked, nodding through his hood to the one opposite. ‘My last, we all know that.’

Silence, except for the van’s creaking suspension and the drone of its throaty engine. He imagined questioning looks from the musclemen to the leader, the driver fixing his eyes on the road, maybe a glance in the rear-view mirror.

The dead man had spoken.

A sigh, the rustle of clothing, a pocket unzipped, the sound of a cigarette tapped from the pack. He could smell the nicotine despite the strong diesel fumes. A hand heavy on his shoulder – the muscleman by his side – while the hood was pulled up, just above his mouth, by the one opposite. Vladimir felt cool air on his lips, and smelt the stale coffee breath of the man about to give him a cigarette.

The smack in the mouth wasn’t entirely unexpected. Stunned him all the same. He slid off the bench onto the floor, and while three of the men burst out laughing, he stretched out his left leg towards the rear of the driver’s seat – nothing in the way, no vertical strut. But there could still be a wire mesh separating the rear compartment from the front. He rocked back onto his knees, and addressed the one who’d hit him. He lowered his head, bychit-style, a bull about to charge, and spat out the words amidst spittle and blood from a split lip.

This time the punch was fully expected. He railed back and up, travelling with the force of the uppercut, his head in the gap between the driver and the leader. That cost him a whack from the latter on the top of his head. Didn’t matter. No wire mesh. Rough hands slotted him back on the bench where he’d started. Profanities poured forth. Nothing he hadn’t heard before, or said himself. His face stung. He ignored it. Things settled down. The banter resumed.

He began drawing long breaths, oxygenating his body. He was chilled, because he had no coat. The other men were wrapped in thick commando jackets. It was early spring, still cold. The Volga would be near freezing. Not a problem, he bathed in it every morning. For them, though, it was going to be a different story.

The van slowed. The tick, tick, tick of the indicator. They slowed down further. Stopped. A truck passed fast ahead of them, rocking the high suspension van in its wake. The leader bellowed a command, though he wasn’t stupid enough to name the destination. ‘This way, this way.’ Another lorry – no, a tractor, given the smell of manure – the leader cursing the young driver for not pulling out sooner. The engine revved, the gears engaged, the van pulled forward.

After school J.F. Kirwan studied psychology, then worked in heavy industries, including offshore oil rigs in the North Sea, and nuclear power plants in the UK, US and Japan. Lately he’s been working with airplane safety, which enables him to travel to some far-flung places.

His job is about trying to prevent large-scale accidents. Having studied them for years gives him a sense of how catastrophic events start off slow, simmer awhile, then gather speed and accelerate towards the final event. He uses this experience when writing, and calls it tourniquet plotting. He also spent years as a martial artist, training in Hong Kong, and knows a thing or two about writing fight scenes. But his main passion is diving. He used to be an instructor, and has dived all over the world, and so all three books have an underwater element. Readers – whether divers or not – often say that the books are most vivid in the underwater scenes.

After a scuba-diving injury, and surgery on his back, he couldn’t dive for eighteen months. He missed it so much he started a novel about a young woman, Nadia, who was coerced into working for the Mafia. A fan of Lee Child’s Jack Reacher, as well as other thriller writers such as David Baldacci, Stieg Larsson and Andy McNab, he wanted to create a female protagonist who could mete out justice when required. What started out as a bit of fun gathered momentum as a couple of agents got interested, and then HarperCollins snapped it up with a three-book deal.

This is a rafflecopter giveaway hosted by Partners in Crime Virtual Book Tours for J.F. Kirwan. There will be 1 winner of one (1) Amazon.com Gift Card. The giveaway begins on October 1 and runs through October 20, 2017.