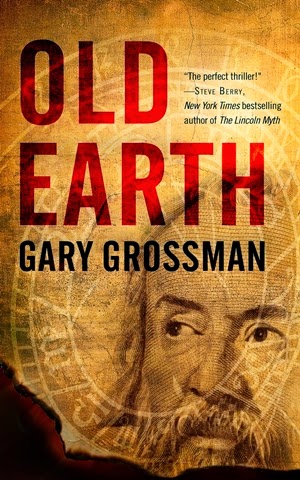 Gary Grossman, author of the wildly popular Executive series, returns with a high-octane thriller that digs into the history of the Earth to find the secrets people are willing to kill to keep concealed.

In the summer of 1601, Galileo Galilei made a startling discovery in the mountains of Eastern Italy that, if made public, could shatter faith in religion, bring down governments and lead to worldwide turmoil.

For more than 400 years the secret has been guarded by a small group of incredibly powerful people, willing to do everything in their power to keep these discoveries from being made. But now, a university dig in Montana headed by paleontologists Quinn McCauley and Katrina Alpert threatens to expose the secret Galileo unearthed, the event that caused him to turn his study to the stars, and the hidden reason the scientist was convicted of heresy by the Inquisition.

McCauley and Alpert find themselves in a global game of cat-and-mouse, seeking answers for a mystery that has endured for centuries, hunted for what they might discover.

OLD EARTH weighs age-old arguments between science and religion in a tense thriller that spans time and questions recorded history.

“A high energy combination of history and intrigue, and last but not least, a great book to bring along the next time you travel.” —Peter Greenberg, CBS News Travel Editor

Mr. Grossman, how did a Galileo Thermometer contribute to your idea for Old Earth?First and foremost, thank you for inviting me to participate in Hott Books. Hopefully, OLD EARTH will live up to your blog’s name.

The plot of OLD EARTH came quite simply at first. I wanted to write a novel about an incredible discovery that paleontologists would uncover. I had ideas of where to take it, an inciting incident (critical to a thriller), and key plot points to follow. I began by introducing my protagonist and got him on his journey. Then I stopped short.

Something was missing; something essential to my writing: Historical underpinning.

A sidebar before I continue. I’m a documentary TV producer, a teacher, a media historian, a news junkie and an avid researcher. My three previous thrillers were rooted in politics, current events, and global issues. Moreover, “Executive Actions,” “Executive Treason,” and “Executive Command” are driven in a contemporary sense by important historic elements.

I hadn’t done that for OLD EARTH. It needed it. I hit the Internet looking for a parallel story that might provide the grounding. It came quickly. I explored the history of paleontology, which took me to other sciences and other scientists, in particular, a mathematician from Pisa – Galileo Galilei. I hadn’t known that Galileo invented a device called the thermoscope; to us, today, the thermometer. My mind raced. Where would he have tested such an invention? Naturally, I thought, in a location where he’d find variations of temperatures – a cave. Further research revealed that Galileo had explored caves in Italy. On first blush, my conceit could work. But now I had to tie Galileo into the plot of with contemporary characters. That came in a flash. They’d find the same thing! The extra historical twist I applied was that this very discovery was what pointed Galileo to astronomy.

What made you want to tackle the science versus religion argument? It seems that science and religion are colliding in the news every day. Whether the issues are over the climate, vaccines, or the age of the Earth, emotions run high and constituencies tend to stick to their own positions.

As the plot continued to grow in my mind and on paper, I realized that I would be taking on debates that have divided people for centuries. Galileo’s intersects with OLD EARTH gave me instant access, for his Inquisition clearly represented the schism between science and religion. But in dealing with typically heated arguments over the age of the Earth, I decided not to antagonize those with points of view that differ from the scientists in the novel. Accordingly, Dr. Quinn McCauley, asks his students to pose the beliefs of Young Earthers in order to understand their passion. In this manner, science was used in defense of theology, and religion became a very important through line (Spoiler alert, that is a key plot point.)

In all, I tried to treat everyone with respect and create a fun, thrilling, thought-provoking read.

How has writing Old Earth changed you? What a dynamic question. OLD EARTH has introduced me to new characters that I’d like to take further.

In success, I’ll have two series to keep me engaged – my political thrillers under the “Executive” banner and what I now term as my geological thrillers. I’m thinking of where I’ll go with each right now and whether I’ll even see crossover between the two. (There’s one hint in OLD EARTH that some readers may catch.) Other changes are worth noting. I sought to write a quicker, tighter novel with fewer characters, all intersecting in a dynamic time-jumping, globe-hopping mystery. Along the way, OLD EARTH will deliver heaping doses of history and some intriguing What If questions to consider.

Thanks to @HottBooks for letting me blog. I hope I’ve engaged you and you’ll check out “OLD EARTH.” It’s published by Diversion Books and available in print, eBook and Audible editions. Let me know what you think. You can reach me via my website www.garygrossman.com, email at gary@garygrossman.com or Twitter @garygrossman1.

Something about this synopsis pulled me, even though it’s not my typical read. There is nothing light and fun about Old Earth. It’s an intriguing and thought provoking thriller that takes you on a journey through time.
I really enjoyed Old Earth but it took me a very long time to read it. This is not a book that can be read quickly or without thought – every conversation, every word has meaning – and, you need to savor every word.
My biggest concern before reading this was that the science versus religion argument would offend me. However, I can say that they way in which Mr. Grossman wrote Old Earth presented facts from both sides and characters held strong opinions but that he didn’t write anything that would try to sway a reader to either side, he just used them to tell an amazing story.

Gary Grossman, author of wildly popular Executive series, is a print and television journalist, an Emmy Award-winning network television producer, and a film and TV historian.

Catch Up with Gary:

Enter for Your Chance to Win!

Thank you to Gary Grossman, Diversion Books, and Partners in Crime Virtual Book Tours for generously offering this book to me for review.

Check Out the Other Old Earth Tour Participants:

2 thoughts on “Gary Grossman Stopped by to Visit Today!”