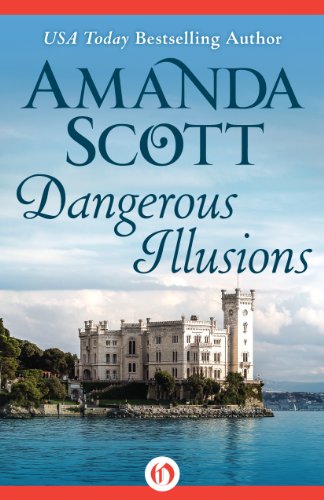 The first book in Amanda Scott’s acclaimed Dangerous series journeys from the battlefields of Waterloo to the ballrooms and boudoirs of London, where a deadly deception unfolds…

Engaged by proxy to a man she’s never met, Lady Daintry Tarrant is dismayed when the war hero returns, introducing himself as her fiancé, Lord Penthorpe. She cherishes her independence and has turned away many suitors, but this one she must marry. Penthorpe is completely captivated by Lady Daintry – but he’s not who he claims to be.

Penthorpe and Lord Gideon Deverill fought together at the battle of Waterloo, and when Penthorpe fell, Gideon assumed his identity in order to see the beautiful Lady Daintry. Gideon knows there’s bad blood between Lady Daintry’s family and his own, but he’s smitten with Daintry and determined to reunite the bitterly feuding clans. When a ghost from Gideon’s past appears, he could lose everything – including Daintry’s love.

In Dangerous Illusions we have a suspenseful historical romance. It was riveting wondering what would happen next.

It seems a wonder to me that I’d not read Dangerous Illusions before today. I didn’t love Daintry in the beginning, though Aunt Ophelia would keep me reading for days. I did appreciate how Ms. Scott showed there way to be married and independent without making your husband a lapdog. It’s a very fine line but an extremely important one.

The only thing that irked me is that I felt that there were a few loose ends. Nothing major just not where I’d prefer to leave the story.

There were times I thought there may be some triggers in here that would deter readers, they never arose. Even the steam was appropriate for most because there were only two scenes one a dream that cut off before anything truly steamy happened and the other a would-be rape that is interrupted before much more than fear is put in our hearts.