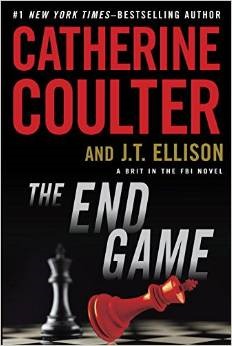 FBI agent Nicholas Drummond and his partner, Mike Caine, are deep into an investigation of COE—Celebrants of the Earth—a violent group known for widespread bombings of power grids and oil refineries across the country. While investigating a tip from a civilian who’s overheard about a possible bombing plot, the Bayway Refinery in New Jersey explodes. Nicholas and Mike race to the scene and barely escape being killed by a secondary device.

Returning to the civilian’s home to continue their interrogation, they discover the tipster—and the FBI team left to guard him—dead. While Nicholas calls in the assassinations, COE strikes again, this time launching a cyber-attack on several major oil companies and draining their financial and intellectual assets.

But COE has been infiltrated by a deep-cover counterterrorism agent named Vanessa Grace. A bomb-making expert, Vanessa must leave COE and join forces with Nicholas and Mike to stop the organization’s devious plan to assassinate the President. But there’s an assassin on the loose who could tip the scales in COE’s favor, and no one knows his ultimate target, or who has contracted his services.

Working with the CIA, the Secret Service, Mossad, MI-5, and even Savich and Sherlock, Nicholas and his team put their lives on the line to prevent another conflagration—and save the President.

Somehow these ended up on my schedule in reverse order. Duh!

The End Game is an intense, thought-provoking suspense that shows us how easily so many are manipulated.

While I think The End Game was a great book, I didn’t think it was a particularly quick or easy read. The characters are numerous but easy to keep track of. They’re interesting, very different, and their names aren’t at all confusing. The plot is intricate but believable, I especially love how coding is pulled in so frequently. And, I enjoy how the agencies work so well together *sarcasm*. BUT there are a lot of pages and there are several countries and subterfuges involved that require you to pay attention to what’s going on because it’s easy to miss important details. So, yes, a great book but it requires thought.

I can’t wait to read the next… or previous book in this series! I’m really starting to get into these characters!

Catherine Coulter is the author of 70 novels, including 66 New York Times bestsellers, occasionally, after exhaustive prayers, hitting #1. She earned her reputation writing historical romances to pass the time while aboard the ark. Over a decade ago she added suspense thrillers to her repertoire– with great success. The Cove, the first book in her bestselling “FBI Suspense Thriller Series” spent nine weeks on the New York Times list and has to date sold over 2 million copies. Since then, she has written 16 more bestselling thrillers in the series, including The Maze, The Target, The Edge, Riptide, Hemlock Bay, Eleventh Hour, Blindside, Blowout, Point Blank, Double Take, Tailspin, Knockout, Whiplash, Split Second, and Backfire. Her 17th FBI thriller Bombshell will be out in all formats July 9, 2013. Coulter is now working on a new suspense thriller series — A Brit in the FBI — co-writing with bestselling author JT Ellison. The first book in this series, A Final Cut, will be released in September 2013.

For Coulter’s first novel, The Autumn Countess, she chose a Regency setting for her debut because, says Coulter, “as any published author will tell you, it’s best to limit the unknowns in a first book, and not only had I grown up reading Georgette Heyer, whom I worship, but I earned my M.A. degree in early 19th century European History and could fight in Napoleon’s army, or join the Allies and beat his butt with Wellington.”

Following The Autumn Countess, Coulter wrote six more Regency romances. She then turned to long historicals and eventually interspersed them with contemporary suspense novels, beginning with False Pretenses in 1988, her very first hardcover.

Coulter grew up on a horse ranch in Texas, and graduated from the University of Texas, receiving her graduate degree from Boston College. She became a speechwriter on Wall Street, then, to her joy, she was able to quit her day job and become a full-time writer.

She lives with her physician husband and three cats in Marin County, California, right over the Golden Gate Bridge. She loves to travel, loves to kamikaze down the ski slopes, and reads voraciously while recuperating. She likes to laugh, loves a good joke, and believes the publishing business is too crazy to take seriously.

If you read just one of Coulter’s FBI thrillers, she’s got you, so prepare for eye strain and jumping at things that go bump in the night.

One thought on “Review | The End Game”