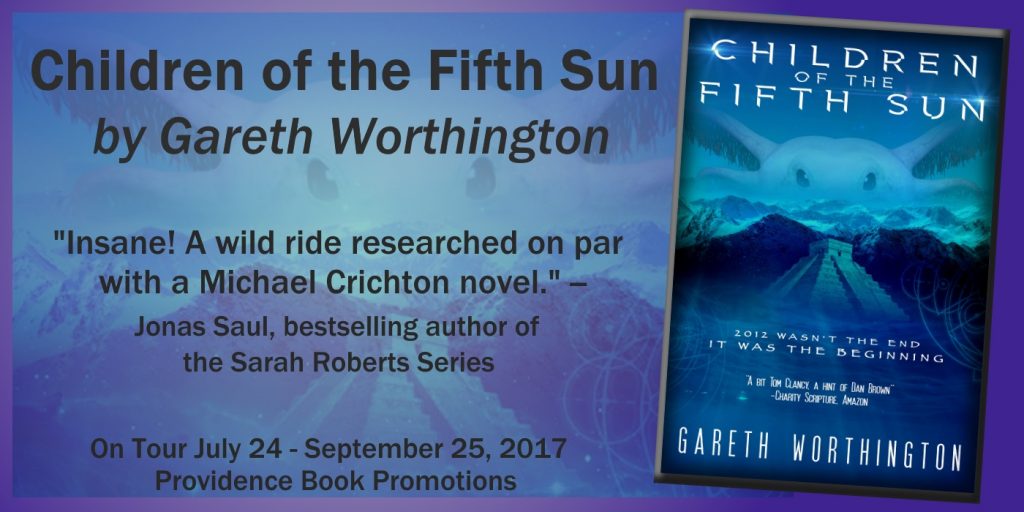 Children of the Fifth Sun 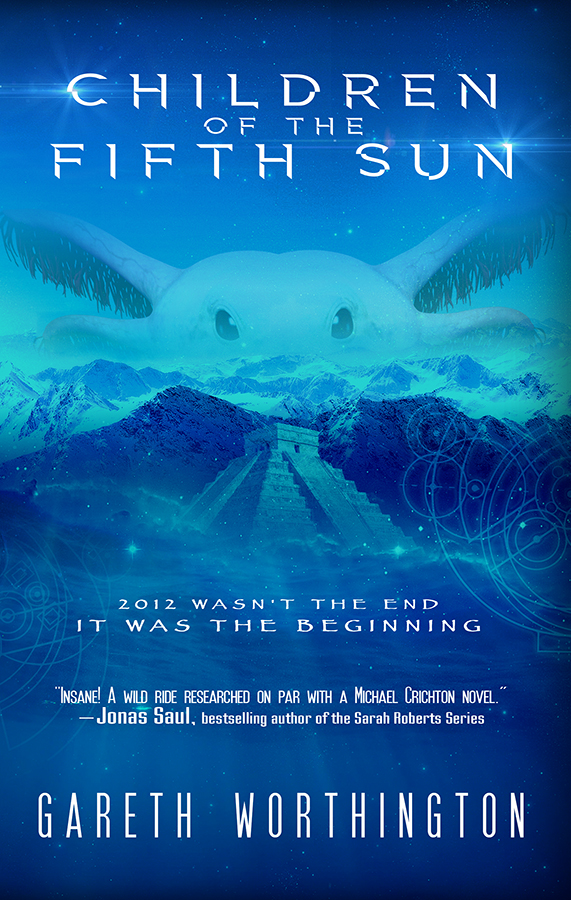 Thousands of years ago, an ancient species from the sea saved humanity; now a cocky, free-diving photographer tortured by his past is the unlikely hero who must save the last of their kind from a global race between nations to control the creature’s power.

IN ALMOST EVERY BELIEF SYSTEM ON EARTH, there exists a single unifying mythos: thousands of years ago a great flood devastated the Earth’s inhabitants. From the ruins of this cataclysm, a race of beings emerged from the sea bestowing knowledge and culture upon humanity, saving us from our selfish drive toward extinction. Some say this race were “ancient aliens” who came to assist our evolution. But what if they weren’t alien at all? What if they evolved right here on Earth, alongside humans . . . and they are still here? And, what if the World’s governments already know?

Kelly Graham is a narcissistic, self-assured, freelance photographer specializing in underwater assignments. While on a project in the Amazon with his best friend, Chris D’Souza, a mysterious and beautiful government official, Freya Nilsson, enters Kelly’s life and turns it upside down. Her simple request to retrieve a strange object from deep underwater puts him in the middle of an international conspiracy. A conspiracy that threatens to change the course of human history.

Freya elegantly glided in front of Kelly, breaking his train of thought. Her slender body slid through the water with grace and ease. She must have sensed his stare, because she turned her head to face him and gave a huge, regulator-filled grin. Kelly stifled a laugh.

He turned back to his equipment to check their depth—sixty-five feet. They were at the sea floor. It wasn’t very deep, but this was where it was supposed to be. He motioned his right arm to get Freya’s attention. He then signaled for her to look down and keep her eyes open. She gave the okay sign.

As they swam a little further, the structure came into sight just as Alexandro’s information had indicated. A large horseshoe-shaped wall, three-feet thick and six-feet tall, spanned more than two-hundred-fifty feet in diameter. Other than that, it was unimpressive—just an old stone wall. Surely, if a team had already been down here, they would have found an orb? Kelly pulled himself along the bottom, sifting through the sand, picking up each stone he came across. He shook his head and looked across at Freya. She seemed to be having similar poor luck, pointlessly rummaging through silt and mud. He swam across to her and pointed in front, indicating his intent to look on ahead. She nodded and watched as he flicked his fins, disappearing into a haze of ocean and sand particles.

Freya returned to her treasure hunt. All she found were rocks and the odd tin or soft drink can. Ugh, it was disgusting. Even the ocean wasn’t safe from humanity. She reached the outer edge of the stone wall and swam along, keeping close to it. Her gloved fingers prodded into each crack and crevice, not that she could feel anything through the thick material. Her mask was beginning to fill with water. She thought about Kelly’s instruction and began the mask clearing procedure.

Pressing the palm of her right hand against the top of her mask so the bottom released a few millimeters from her face, she exhaled hard through her nose, forcing the water out. A stream of bubbles crashed about her head in a white-water curtain. As it cleared, a small metallic glint protruding from beneath one of the huge stone bricks caught her eye. She clawed her way to it, then started digging in the sand. The fine silt clouded up around her, obscuring her view. Using only her limited sense of touch, Freya kept tunneling under the wall. The familiar shape of a box began to form under her fingers. She dug beneath until she could grip the box with both hands. Tugging hard, she released the cuboid object from its hold in the silt. The billow of sand cleared.

She stared at her treasure. It was a small chest, copper-colored with a green oxidized coating on its surface. She smiled. Could this be it? Could there be an orb inside? The excitement power through her. She raised her head to see if Kelly was nearby, but he wasn’t anywhere to be seen. She swam in a circle. The inability to hear or feel anything was unnerving. She only had the power of sight and that was restricted to a straight line in front of her for one hundred fifty feet or so.

The light above her dimmed. Freya frowned and raised her head to investigate. Above her, the huge shadow of a shark glided by. She knew her mask would magnify any object, but still, the thing looked huge. Its blunt snout and thick body looked positively primeval—the perfect predator. Panic set in.

Damn, where was Kelly? Clutching her treasure, Freya lowered her head. She searched for the knife strapped to her right calf. Before she could find it, her gaze was met by the cold stare of reptilian eyes. A sea snake was inches from her face, rippling its body to hold its position. Its eyes were fixed on hers. She froze, holding her breath. Freya shifted her focus from the uncomfortably close predator to the shadow lurking behind it. Oh God. The shark?

It was Kelly. A brief feeling of relief washed over her, but it was snatched away by the searing pain of fangs plunging into her left hand. Freya gargled a scream through her regulator and dropped the box, letting it fall to the sea floor. The snake shot off into murk as Kelly tore through the water toward her. Her breathing slowed and her limbs grew heavy. Her eyelids slid closed. She blinked before her eyes closed one last time.

Gareth Worthington holds a degree in marine biology, a PhD in endocrinology, and currently educates the World’s doctors on new cancer therapies. Gareth has hand tagged sharks in California; won honorable mention at the New York Book Festival 2012 and 2013 for his writing; and trained in various martial arts, including Jeet Kune Do, Muay Thai, and MMA at the EVOLVE MMA gym in Singapore and Phoenix KampfSport Switzerland. Born in Plymouth UK, Worthington currently resides outside of Zurich, Switzerland.

Stop by the other hosts for more great reviews, interviews, guest posts, and giveaways!