I don’t believe fiction, especially Christian fiction for young people, needs gratuitous violence to make the plot exciting. I was happy to discover Wall Street Journal book reviewer Meghan Cox Gurdon and her Imprimus article, “The Case for Good Taste in Children’s Books.” In it she gives examples of unbelievable violence taken from current, best-selling young adult fiction and then makes a compelling case for why this is a dangerous trend:

What I do wish is that people in the book business would exercise better taste; that adult authors would not simply validate every spasm of the teen experience; and that our culture was not marching toward ever-greater explicitness in depictions of sex and violence. Books for children and teenagers are written, packaged, and sold by adults. It follows from this that the emotional depictions they contain come to young people with a kind of adult imprimatur. As a school librarian in Idaho wrote to her colleagues in my defense: “You are naïve if you think young people can read a dark and violent book that sits on the library shelves and not believe that that behavior must be condoned by the adults in their school lives.”

. . . Let me close with Saint Paul the Apostle in Philippians 4:8: Whatever is true, whatever is noble, whatever is right, whatever is pure, whatever is lovely, whatever is admirable—if anything is excellent or praiseworthy—think about such things. And let us think about these words when we go shopping for books for our children. (Reprinted by permission from Imprimis, a publication of Hillsdale College.)

I wholeheartedly agree with her position. You can read the rest of her excellent article HERE.

The Good, the Bad, and the Ugly

But in writing fiction, you do have to have bad guys. I believe that to be compelling, relevant, and useful Christian fiction should honestly address the difficult issues of our times. How will the good be revealed unless it is contrasted to the bad?

One of the minor themes that developed in Unclaimed Legacy is spousal abuse—not a pretty topic to be sure. This is why I don’t recommend it for younger teens, even though I kept the violence to a minimum and mostly offstage.

It wasn’t easy writing about domestic violence, but it is a part of daily life for so many families that I felt I couldn’t gloss over it in telling Reuben and Franny’s story (the historical backstory in Unclaimed Legacy).

As the blurb for Unclaimed Legacy says, sometimes when Abby and John are “time-surfing” they learn more than they want to know about people from the past. (Read the full blurb and a free chapter of Unclaimed Legacy HERE) Sometimes, when I’m researching for my books, I learn more than I want to know too! I discovered some shocking facts. Futures Without Violence.com says:

One in four women has experienced violence by a boyfriend or spouse.

On average 500 women are raped or sexually assaulted each day in the U.S.

Trish Jenkins says in her book Treasures of Darkness—which I highly recommend, by the way—that the prison nurse estimated that 96% of her fellow inmates had been the victims of sexual or other physical abuse. (You can see my interview with Trish HERE.)

And domestic violence begins earlier than I ever dreamed—with dating teens! According to the Joyful Heart Foundation, 51% of all 15-22-year-olds in the United States know a victim of dating violence or sexual assault.

And lest you think Christian families are immune, think again. Religion Today tells the story of “Marleen” whose husband was an upstanding member of the church—a deacon and a Sunday School teacher no less. When “Marleen” went to her pastor for counsel, he advised her to “try to submit more.” Two weeks later, she was dead, murdered by her husband. I think there will be a special punishment for this kind of thug.

The Worst Fictional Bad Guy I Could Imagine

And I imagine that the horror and and psychological damage of domestic violence must be much worse where perpetrators use the Bible (misinterpreted and bent all out of recognition) to justify their crimes—as my fictional character Bertram White does.

When I needed a bad guy for Unclaimed Legacy, I couldn’t think of a worse thing than that he would be a man who quoted the Bible while beating his wife. I kept the photo of this unknown angry man over my computer while inventing Bertram White.

Meet Bertram White in this excerpt from Unclaimed Legacy:

Bertram White slowed his buggy and turned into the lane, eventually coming to a stop in front of the barn. He lumbered down from the buggy and unhitched his lathered mare. Slapping her rump, he turned her out into a pasture that lay beyond the board fence that ran behind the out buildings. He took off his gray felt hat and wiped his face with his handkerchief. His face was red, his mouth set in angry lines, a vein prominent on his nearly bald head.

Kicking at a chicken that was in his path, he stormed across the yard and up the steps onto the 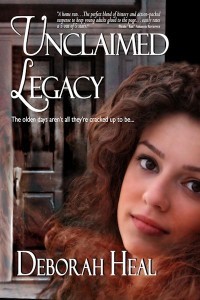 porch, the boards creaking under his weight. The screen door wailed softly before banging shut behind him. He walked into the dim kitchen and looked around in disbelief. Supper not even started. He swore in disgust and started down the dim hallway, his boots falling like sledge hammers on the wooden floor. When he reached the parlor at the front of the house, his footsteps were hushed by the Oriental rug, but still an aura of violence followed him into the quiet room. He saw that his wife sat staring out the tall front window, its mullions casting a cross-hatched shadow on her face.

He flipped open his pocket watch and she jerked out of her reverie and turned to him. Her face drained of color and she stood, stumbling against the chair leg in her haste.

“It’s getting on to six o’clock,” he said, snapping the watch case shut. “But for some strange reason I don’t smell supper cooking.” His voice was like angry hornets looking for the farmer that had stirred up their nest.

“I was watching for the stagecoach.” She made her lips turn up in a smile, because sometimes she could jolly him out of a bad mood. “Only two riders today, Bertram. We’ll miss seeing the stage coaches go by, won’t we?” A little breeze pushed its way into the stuffy room, shushing the burgundy damask drapes and playing with a few strands of dark hair that had escaped from her chignon. She lifted a pale, thin hand and nervously smoothed it away from her face.

“Well, I for one, am happy to see the railroad come, but that’s neither here nor there. I warned you about having my supper ready on time.”

“I’m sorry, Bertram. I’ll get right in the kitchen and I’ll—”

“It’s too late for your excuses now.” He took off his jacket, laid it neatly over the arm of the settee, and unbuttoned his top shirt button. Even that didn’t take away the angry redness from his face.

“You have to obey me! The preacher said so, ‘Wives, submit to your husbands.’ Ephesians 5:22.”

He whipped his leather belt through the loops on his pants. The snapping sound caused her to flinch.

“You make me do this,” he said, grabbing her arm.

In the gloom of the museum theatre Abby could barely see him, but she heard his breath coming in a sort of wheezy pant. Then she realized she was wheezing too. “I wish there was a way to call the cops on him.”

“I wish there was a way I could get my hands on that sanctimonious toad for just one minute,” John said.

Abby sank onto a seat in the front row. “He’s so full of hate. Guess he forgot that next verse about men loving their wives. I feel a little sick to my stomach.”

Merri sat down next to her. “And I thought my parents’ marriage was bad. Please don’t ever make me go inside that guy’s head again. And why did we, anyway? One minute we’re watching that woman waving at us and the next—”

“I was trying to lock onto her, but we’re too far away from Shake Rag Corner. So it locked onto that Bertram White guy when he drove up.”

John came and sat on Abby’s other side. “I wish we could get closer,” he said.

Abby blinked. But then realized John meant get closer to Shake Rag Corner. She wished he would put his arm around her and hold her for about an hour. She was sure if he did, the hate and violence of the scene they had just witnessed would go away.

What Would Meghan Say?

I think Meghan Cox Gurdon would approve of my handling of the subject. (Now if only she’d post a review of Unclaimed Legacy in the Wall Street Journal!)

I pray that if anyone reading this is in a violent relationship you will be rescued from your misery. If Christians—even pastors—are telling you that you are obligated, as a good wife, to endure the beatings, I want you to know that I and many other Christians—even especially pastors—would tell you that you are not! Flee to safety! The first step might be calling the National Domestic Hotline. 1-800-799-SAFE. Meanwhile, know that I’ll be praying for you.

I am the author of the Time and Again time-travel mystery series. I was born not far from the setting of Every Hill and Mountain and grew up “just down the road” from the setting of Time and Again and Unclaimed Legacy. Today I live with my husband in Waterloo, Illinois, where I enjoy reading, gardening, and learning about regional history. We have three grown children, four grandchildren, and two canine buddies Digger and Scout. I love to interact with my readers, so I hope you’ll leave a comment below.

For a limited time, Unclaimed Legacy is available for 99 cents!

Deborah Heal, the author of the Time and Again time-travel mystery series, was born not far from the setting of Every Hill and Mountain and grew up “just down the road” from the setting of Time and Again and Unclaimed Legacy. Today she lives with her husband in Waterloo, Illinois, where she enjoys reading, gardening, and learning about regional history. She has three grown children, four grandchildren, and two canine buddies Digger and Scout. She loves to interact with her readers, who may learn more about the history behind the books at her website www.deborahheal.com and her Facebook author page. Her books may be purchased in paper and ebook formats at Amazon.com or Barnes and Noble.com.