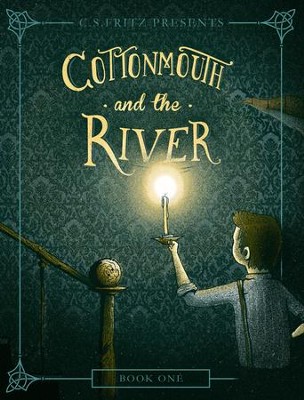 When Freddie finds a mysterious egg in the river he loves he also discovers a new friend, Tug, who makes Freddie promise never to eat the egg.

In return for obeying the promise, Tug takes Freddie on wild adventures. But Freddie is about to discover that broken promises come at a great price.

Ten-year-old Frederick is left alone and orphaned with only the river to know his sorrow. The river, feeling his pain, gives Frederick an egg that grants wishes… as long as he doesn’t eat it. Plus, he gets Tug the Comforter.

What I liked: Cottonmouth and the River is a great book to share with children. It’s a terrific story about consequences, and a fictionalized rendition of what Jesus has done for us. It’s a solid support for lessons or story-time.

* Those of us who are Christians will see the symbolism but for those who aren’t, this is still a good book with a great moral about keeping promises.

What I didn’t like: While I think this would be amazing printed, it was very hard to read on the Kindle. The pages are all images and cannot be enlarged.

Casey “C.S.” Fritz grew up on a farm in Oregon, where he milked cows and had a pet pig. To escape the endless chores of milking cows and watering tomatoes…Casey would draw.

As a young child, Casey’s family moved to Arizona. It was there beneath the fiery gaze of the Southwestern sun, that he spent most of his life. Graduating school, marrying the love of his life and having two wild kids. It was also there that C.S. Fritz’s work began to take traction with local galleries and art publications.

In 2011 the Fritz family went west to the great city of Los Angeles. It is here that Casey operates as one of the lead pastors at Collective Church, while drawing monsters in his spare time.