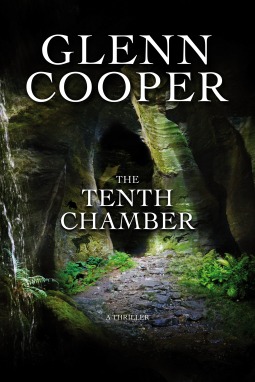 After a fire tears through the library of an ancient monastery a medieval script is discovered hidden behind an antique bookcase. Badly damaged, it is sent to Paris for restoration and there literary historian Hugo Pineau begins to decipher the startling fourteenth-century text. Within its pages lies a fanciful tale of a painted cave and a rudimentary map. Intrigued, Hugo enlists the help of archaeologist Luc Simard and the two men embark on a journey that will change the course of their lives forever.

When Luc and Hugo discover a vast network of prehistoric caves, buried deep within the cliffs, they realize that they’ve stumbled across something extraordinary. And at the very core of the labyrinth lies the most astonishing chamber of all, the tenth chamber. Aware of the significance of their discovery, they set up camp with a team of experts, determined to bring their find to the world. But as they begin to unlock the ancient secret the cavern holds, they find themselves at the center of a dangerous game. One ‘accidental’ death leads to another and it soon becomes clear that someone or something will stop at nothing to protect the secret of the tenth chamber.

I was surprised by The Tenth Chamber. When I first started reading it was tremendously confusing. The vocabulary, while not unfamiliar, wasn’t something I could read without thought. I forced myself to give it a chance. About a quarter of the way through I realized it wasn’t the vocabulary solely that was the issue, it was the inconsistency in the vocabulary. One moment I felt like I was reading a thesis and the next, sometimes in the same sentence, like I was in a dive bar. Not that anything is wrong with either, it was just that the incongruity made it necessary to think. In some ways I wished the book had a different plot, because I would have lived to give it to my boys to boost their vocabulary.

The plot of The Tenth Chamber, though interesting wasn’t quite what I’d expected. It wasn’t much of a scary thriller, more of a mystery. We always know the culprit just not necessarily why or how they’re connected.

There is quite a lot of murder in its pages but The Tenth Chamber is neither graphic nor gruesome, until the last chapter. There are little or no details on the deaths or other tragedies, just the conversation and statement of death. The last chapter is a bit different than the rest of the book. It’s a bit more gory, there’s more steam, and there’s more violence. There is a lot crammed in there to pull together the loose ends.

Overall, I have to say, I’m glad I didn’t pay for The Tenth Chamber and I won’t be reading it, or any other books from Glenn Cooper.

Glenn was born in New York City and grew up in nearby White Plains. He attended White Plains High School before enrolling at Harvard University in Cambridge, Massachusetts where he graduated from Harvard with an honors degree in archaeology. He then attended Tufts University School of Medicine and did his post-doctoral training at the New England Deaconess and the Massachusetts General Hospitals becoming a board-certified specialist in Internal Medicine and Infectious Diseases. After practicing medicine, Glenn began a research career in the pharmaceutical industry which culminated in an eighteen-year position as the Chairman and CEO of a biotechnology company in Massachusetts. Glenn began writing screenplays over twenty years ago and his interest in movies prompted him to attend the graduate program in film production at Boston University. He is currently the chairman of a media company, Lascaux Media, which has produced three independent feature-length films. In 2006 Glenn turned his hand to novel-writing. His debut novel, THE LIBRARY OF THE DEAD, the first in a trilogy, became an international bestseller and was translated into thirty languages. All of his seven published books have become top-ten international best-sellers.