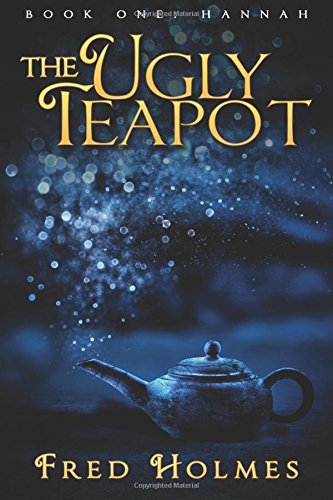 Fourteen-year-old Hannah Bradbury loved her father so much that she worried about him constantly. After all, he was a photographer who traveled to the most dangerous places in the world.

To allay her fears, each time he came home he brought her silly gifts, each one with supposed magical powers: the Seal of Solomon, the Ring of Gyges, even Aladdin’s Lamp. It was that lamp Hannah found the most unbelievable, for it looked like an ugly teapot. Nevertheless, her father assured her it was real, and made her promise to save her three wishes for something very special.

Then . . . six months later . . . the unthinkable happened. Her father was killed while on assignment to Baghdad. And so on the day of his funeral Hannah did something she never thought she would ever do.

I really wanted to love The Ugly Teapot. This middle-grade fantasy on the surface looked to be a new favorite for me. Except. I just couldn’t like Hannah. I’m pretty sure it’s a personal thing – her personality reminds me of someone I just do not like – that I just couldn’t get past.

Has that ever happened to you? A personal relationship ruined a terrific book because you just couldn’t resonate with the character?

Try out The Ugly Teapot and let me know what you think.

THE UGLY TEAPOT is Fred Holmes’s first fiction novel, having previously ghost written a nonfiction book, LETTERS FROM DAD, published by Thomas Nelson. He is known primarily as a writer and director of films and television, working primarily in family films and children’s television. His work can be seen on Mary Lou Retton’s FLIP FLOP SHOP, BARNEY & FRIENDS, WISHBONE, HORSELAND, IN SEARCH OF THE HEROES, and many other shows, for which he has won two Emmys and three CINE Golden Eagles, among numerous other awards. He has also directed three feature films, including DAKOTA, starring Lou Diamond Phillips, distributed by Miramax, and HEART LAND, a Bollywood feature film shot on location in India. He lives with his wife and son in the southwest United States.