My Sister’s Intended by Rachael Anderson 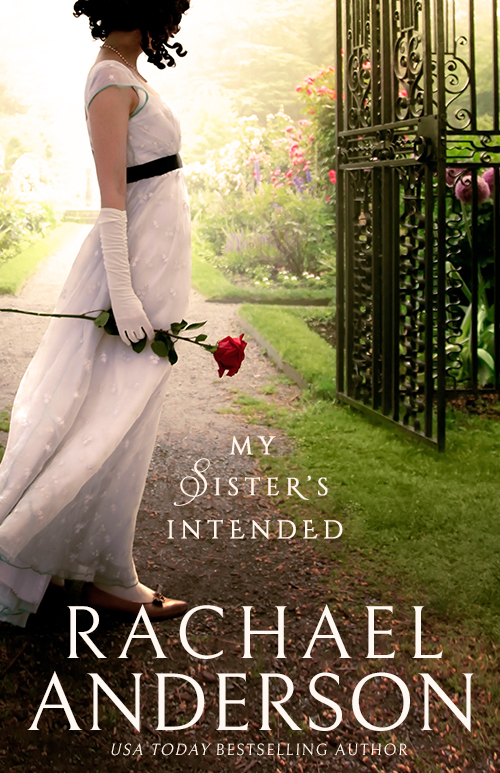 For as long as Prudence can remember, it has been understood that her sister will one day wed the eldest son of their nearest neighbor. Such an alliance will benefit both families and bring a great deal of joy to all parents involved.

Unfortunately, Prudence has never been able to feel as joyful. She believes her sister is mad to consider marrying a man she hardly knows, even if he will one day make her a countess. Titles and wealth shouldn’t factor into matters of the heart, and as an aspiring romance novelist, Prudence cannot fathom how anyone could even think of settling for less than love. She certainly wouldn’t, and she doesn’t want her sister to either.

Unable to stand by and do nothing, Prudence sets out to help the awkward couple discover the best in each other with the hope that they will eventually find love. What she neglected to foresee, however, was the possibility that she might fall in love with Lord Knave herself.

“I got seriously hooked on this book right from the first glance. Everything in this story is so beautiful and done so perfectly. The cover is stunning, the blurb intriguing and the story flow expertly done.” –NjKinny’s World of Books & Stuff

“The moment I set eyes on this cover page, I knew I am going to love this cute love story. Delightfully crafted with endearing characters this is an ongoing tale of fun, love and some hard decisions. –Finitha J., Know Your Books Blog

“My Sister’s Intended is my FAVORITE kind of book to read. It is the kind of story I will save in my Kindle forever so I can re-read again and again. What makes this story so good? Everything! This book is pure perfection.” –Nicole, Christian Fiction Girl Blog.

“WOW. I reserve five stars for books that blow me away, and this has become my newest addition! What a delight to discover a gem like this.” –Mary, Goodreads.com

Plus, read my review here: HottBooks Review of My Sister’s Intended

When Prudence lifted her eyes to his again, they sparkled with a challenge. “I was going to save this question until later so as not to shock you from the get-go, but I really do need to know . . . What does it feel like to kiss a woman?”

A large lump formed in Brand’s throat, and his mouth went dry. What the deuce? She had promised not to ask questions that would make him uncomfortable, but already he wanted to flee like a frightened kitten. How could he possibly explain how it felt to kiss a woman?

Brand searched his mind for a way to avoid answering until he heard a snicker escape her lips. She was laughing at him. Him! Hildebrand Ethan Cannon, Viscount Knave—a man at least eight years her senior and a great deal higher in social standing.

“You are teasing me,” he said, hoping it was true. If she’d posed the question to make him squirm—and perhaps make him more inclined to answer her other questions—then she wouldn’t be expecting an answer.

She shook her head, still smiling. “I’m afraid not, my lord, although I did find the look of terror on your face vastly amusing.”

“I’m glad I could entertain you.”

“I hope you will be equally glad to instruct me on a few things as well. The first scene in my book will include a kiss, and I have no idea how to describe the experience. Do a woman’s lips feel warm or soft or even moist? Would your pulse quicken? Aside from touch, what other senses are engaged? How would it make you feel and what would you notice when you held a woman in your arms?”

If she thought he’d appeared terror-stricken before, there would be no word for how he looked now. Did she earnestly expect him to answer such questions? Surely even she knew how inappropriate it would be to discuss such things, her being an innocent.

“I cannot say,” he finally muttered.

Her brow puckered in confusion. “Have you never kissed a woman, my lord?”

Brand was sorely tempted to lie and say he had not, but he couldn’t bring himself to do so. Any man of six-and-twenty who had never experienced a kiss would be laughed out of his manhood. Women were expected to remain innocent until married. Men were not.

“Yes, I have kissed a woman,” he finally admitted, “but I have no intention of discussing any of the details with you.”

“Why not?” she asked, her large brown eyes blinking at him curiously. “Would you rather I invent the information?”

She obviously didn’t appreciate his retort because she scowled. “Can you not tell me at least a little?”

“Because a kiss could never be described with any sort of accuracy, at least not by me. It involves too many feelings and sensations and complexities of thought. If you wish to know what a kiss feels like, you’ll have to experience it for yourself.”

Too late, Brand realized his mistake. Her expression became contemplative, as though she was actually considering doing just that. Good gads, had he really just encouraged an innocent young woman to go hunting for a kiss? Who would she ask? A groom? Stablehand? The next peddler that came to town?

“I think you are right,” she said at last. “I really must experience a kiss for myself if I am to describe it with any sort of accuracy.” She blinked up at him with that innocent expression again. “Will you kiss me Lord Knave? No, how silly of me. You are to marry my sister, so that would never do.” She pursed her lips for a moment before musing, “Perhaps one of the footmen would be kind enough to show me how it’s done.”

Kind enough? Brand could think of a great many reasons a footman would comply with such a request, and kindness did not factor into any of them. Brand would kiss her himself before he allowed a footman near her.

He rubbed the bridge of his nose, feeling a headache coming on. “Perhaps I can try to explain what it feels like after all.” Better that than having her chase after a footman.

“But you only just said you couldn’t do it justice,” she pointed out. “I realize I sound dreadfully forward, but I really must know, and experience is the best teacher, is it not?”

“Then who? Felix or Lionel, perhaps? I’m fairly certain I can convince one of them to do it, if given the opportunity. The question is how to go about it?”

It was plain to see by the firm set of her jaw that she would not rest until she had experienced a kiss of her own. She didn’t seem to care who did the deed, only that the man did a thorough job of it. A quick peck on the lips wouldn’t satisfy her curiosities.

“Perhaps I could send a note to Felix and ask him to call on me,” she continued to muse. “We could take a stroll through the maze in the gardens. There is a hidden alcove on the south side, which could be quite perfect. We would have to evade Ruth, obviously, but—”

“Devil take it,” Brand growled as he pulled her to him. Her quick intake of breath was the only sound she made before his mouth covered hers.

A USA Today bestselling author, Rachael Anderson is the mother of four and is pretty good at breaking up fights, or at least sending guilty parties to their rooms. She can’t sing, doesn’t dance, and despises tragedies. But she recently figured out how yeast works and can now make homemade bread, which she is really good at eating.

Thank you to Rachael Anderson and I Am A Reader, Not A Writer for generously offering this book to me for host.
If you’d like to join in on an upcoming tour just stop by their sites and sign up today!