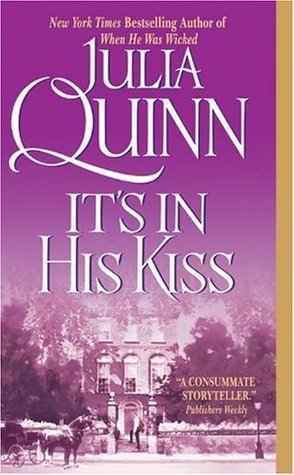 Gareth St. Clair is in a bind. His father, who detests him, is determined to beggar the St. Clair estates and ruin his inheritance. Gareth’s sole bequest is an old family diary, which may or may not contain the secrets of his past… and the key to his future. The problem is—it’s written in Italian, of which Gareth speaks not a word.

All the ton agreed: there was no one quite like Hyacinth Bridgerton. She’s fiendishly smart, devilishly outspoken, and according to Gareth, probably best in small doses. But there’s something about her—something charming and vexing—that grabs him and won’t quite let go…

Or don’t. But rest assured, he’s spinning in his grave when Gareth and Hyacinth cross paths at the annual—and annually discordant—Smythe-Smith musicale. To Hyacinth, Gareth’s every word seems a dare, and she offers to translate his diary, even though her Italian is slightly less than perfect. But as they delve into the mysterious text, they discover that the answers they seek lie not in the diary, but in each other … and that there is nothing as simple—or as complicated—as a single, perfect kiss.

Throughout this series I’ve enjoyed Hyacinth Bridgerton. She’s a great character. Hyacinth has so many qualities that could be annoying or irritating yet she pulls out off with style and charisma.

In It’s In His Kiss one can’t help but fall in love with Gareth St. Clair. His mother is deceased, his father is a complete jerk, and he’s self-sufficient when he could get away with asking for more. Plus, he’s Lady Danbury’s favorite grandson and she’s a treasure.

You can’t help but love these people but their search for the missing treasure is the “something extra” that makes It’s In His Kiss an A+ book. I’ll be reading this again soon!

Hyacinth Bridgerton: The youngest of the famed Bridgerton siblings, she’s a little too smart, a little too outspoken, and certainly not your average romance heroine. She’s also, much to her dismay, falling in love with…

Gareth St. Clair: There are some men in London with wicked reputations, and there are others who are handsome as sin. But Gareth is the only one who manages to combine the two with such devilish success. He’d be a complete rogue, if not for…

Lady Danbury: Grandmother to Gareth, mentor to Hyacinth, she has an opinion on everything, especially love and marriage. And she’d like nothing better than to see Gareth and Hyacinth joined in holy matrimony.

Luckily, she’s to have help from… One meddling mother, one overprotective brother, one very bad string quartet, one (thankfully fictional) mad baron, and of course, let us not forget the shepherdess, the unicorn, and Henry the Eighth. Join them all in the most memorable love story of the year… It’s In His Kiss by the incomparable Julia Quinn

#1 New York Times bestselling author Julia Quinn loves to dispel the myth that smart women don’t read (or write) romance, and in 2001 she did so in grand style, competing on the game show The Weakest Link and walking away with the $79,000 jackpot. She displayed a decided lack of knowledge about baseball, country music, and plush toys, but she is proud to say that she aced all things British and literary, answered all of her history and geography questions correctly, and knew that there was a Da Vinci long before there was a code.

In 2010, Ms Quinn won her third RITA Award in four years and was the thirteenth author to be inducted into the Romance Writers of America Hall of Fame. Her books have been translated into twenty-eight languages, and she has been profiled in USA Today and TIME Magazine. Her twenty-third novel, The Sum of All Kisses, was released in late 2013.