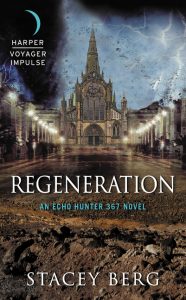 The Church has stood for hundreds of years, preserving the sole surviving city in a desert wasteland. When Echo Hunter 367 is sent out past the Church’s farthest outposts, she’s sure it’s a suicide mission. But just when she’s about to give up hope, she finds the impossible – another thriving community, lush and green, with a counsel of leaders who take her in.

Wary of this new society, with ways so different from the only life she’s ever known, Echo is determined to complete her mission and bring hope back to the Church. She’s unsure who she can trust, and must be strong and not be seduced by their clean, fresh water, and plentiful energy sources. If she plays her cards right, she may even still have a chance to save the woman she loves.

Echo Hunter 367 studied the dying woman in the desert with grudging admiration. The woman had walked long past what might reasonably be expected, if that lurching stagger could be called a walk. When she couldn’t walk any more she had crawled, and after that she had dragged herself along, fingers clawing through sand until they clutched some purchase, body scraping over rocks and debris, heedless of the damage. Now and then she made a noise, a purely animal grunt of effort or pain, but she forced herself onward, all the way until the end.

I smell the water.

Desperate as the woman was, she had still been cautious. Though an incalculable distance from any familiar place, she still recognized danger: the wind-borne sand that scoured exposed skin clean to the bone, the predators that stalked patiently in the shadows for prey too weak to flee. The cliff edge that a careless girl could slip over, body suspended in space for the briefest moment before her hands tore through the thornbush, then the long hard fall.

Echo jerked back from that imagined edge. It was her last purposeful movement. From some great height, she watched herself collapse in the sand. One grasping hand, nails torn, knuckles bloody, landed only a few meters from the spring’s cool water, but she never knew it. For a little while her body twitched in irregular spasms, then those too stilled. Only her lips moved, cracking into a bloody smile. “Lia,” she whispered. “Lia.” Then she fell into the dark.

For a long time there was no sound except water trickling in a death rattle over stones.

Then the high whine of engines scattered the circling predators. Pain returned first, of course. Every inch of skin burned, blistered by sun or rubbed raw by the sand that had worked its way inside the desert-proof clothing. Her muscles ached from too long an effort with no fuel and insufficient water, and her head pounded without mercy. Even the movement of air in and out of her lungs hurt, as if she had inhaled fire. But that pain meant she was breathing, and if she was breathing she still had to fight. With enormous effort she dragged open her eyes, only to meet a blinding brightness. She made a sound, and tasted hot salt as her lips cracked open again. “Shhh,” a soft voice said. “Shhh.” Something cool, smelling of resin and water, settled over her eyes, shielding them from the glare. A cloth dabbed at her mouth, then a finger smoothed ointment over her lips, softening them so they wouldn’t split further when she was finally able to speak. Lia, she thought, letting herself rest in that gentle strength until the pain subsided into manageable inputs. Then she began to take stock.

She lay on something soft, not the rock that had made her bed for so many weeks, although her abused flesh still ached at every pressure point. The air felt cool but still, unlike the probing desert wind, and it carried, beyond the herbal tang, a scent rich and round, unlike the silica sharpness of sand she’d grown so accustomed to. Filtered through the cloth over her eyes, the light seemed diffuse, too dim for the sun. Indoors, then, and not a temporary shelter, but a place with thick walls, and a bed, and someone with sufficient resources to retrieve a dying woman from the desert, and a reason to do so. But what that reason might be eluded her. The Church would never rescue a failure.

Unless the Saint commanded it.

She mustered all her strength and dragged the cloth from her eyes. She blinked away grit until the blurred oval hovering above her took on distinct features, the soft line of the cheek, the gently curving lips. Lia, she thought again, and in her weakness tears washed the vision away. She wiped her eyes with a trembling hand.

And stared into the face of an utter stranger. 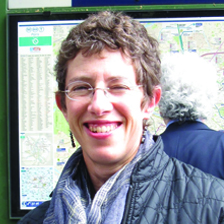 Stacey Berg is a medical researcher who writes speculative fiction. Her work as a physician-scientist provides the inspiration for many of her stories. She lives with her wife in Houston and is a member of the Writers’ League of Texas. When she’s not writing, she practices kung fu and runs half marathons.

Visit the other stops on this tour for reviews, interviews, guest posts, and more great giveaways!!

This is a rafflecopter giveaway hosted by Providence Book Promotions for Stacey Berg and Harper Voyager. There will be 3 winners of one (1) eBook copy of Dissension by Stacey Berg. The giveaway begins on March 13th and runs through April 4th, 2017.

Find Your Next Great Read at Providence Book Promotions!

4 Replies to “Regeneration by Stacey Berg”