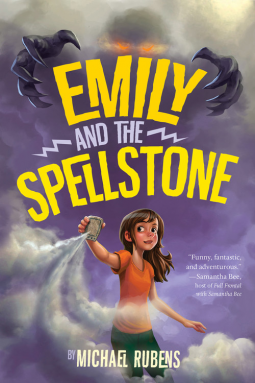 Emily picks up a stone that looks like a cell phone but has unexpected magical powers. It’s a Spellstone! Now that she has become an unwilling Stonemaster—one who wields the power of the Stone—she has to figure out Spellstone technology fast if she is to survive a hair-raising adventure among giant dogs, demons, clones, mean girls, and deeply wicked people who want the Stone. A witty tale of a quiet girl who discovers she’s a hero when she needs to be.

All Emily wanted for her twelfth birthday was a cell phone. Instead she got a Spell Stone with apths. Yeah, this book was just adorably funny.

As I read my niece kept stealing the book or reading over my shoulder. It’s really a lot of fun. The plays on words and similarities to real life tickle your brain and leave you grinning.

There are a few parental warnings though. One of Emily’s constant companions is a demon creature who keeps offering to eat her. Another thing to note is that there is quite a bit of cursing. No actual curse words are used we’re just told that there was cursing.

Emily’s family really bothered me. I know they’re an exaggerated version of decent but uninvolved and clueless parents but they really did bother me. Their selfishness was frustrating and their parenting skills left much to be desired. It was really just sad. Especially since we know there are parents just like that. Yes, they sort of redeem themselves at the end but…

“‘Happy eleventh birthday,’” she muttered darkly. “‘Happy eleventh birthday!’”
Emily angrily upended another bucket of sand to add to the castle she was creating, far down the beach from where her family was.
That’s what the cake had said, in big, happy letters:
Happy Eleventh Birthday, Emily!
They didn’t even know she was twelve!
When her father had opened the box, Emily had said “Glrrrbb,” because that sound, emerging through gritted teeth, is the sound you create when you strangle a scream.
HAPPY ELEVENTH BIRTHDAY, EMILY!
Argh.
Her family, of course, thought the whole thing was hysterical. Her parents laughed. Dougie brayed like a donkey. Even Hilary, whose interactions with the family mostly consisted of her rolling her eyes, joined in the laughter.
“It’s not funny!” said Emily.
“Actually,” said Hilary, “it’s really funny.”
“Sweetie,” said her father, “I’m sorry. The bakery must have screwed it up.”
“Uh-huh,” said Emily. “How do you explain that candle?”
Her father took a better look at what he was placing on the cake—​one of those candles in the shape of a number. Which, in this case, was 11.
Her father stared at the candle, as if trying to comprehend exactly what he was looking at. Then he said: “HA HA HA HA HAAAA!”
. . . and the rest of the family joined in again.
“Stop laughing!” said Emily.
“Honey, come on,” said her mother. “We all know that you’re . . . uh . . .”
“TWELVE!”
“Of course! Let’s all just sing ‘Happy Birthday’ and enjoy the cake. Come on, everyone. ‘Haaaappy biiiirthday to—’” which is when the seagull pooped on the cake and everyone burst into hysterical laughter again and Emily bellowed, “That’s IT! I’ve HAD IT!” and stormed off down the beach.

It shouldn’t surprise her that they didn’t know how old she was, she thought as she built up the castle. She was lucky they put an eleven on the cake—​most of the time they treated her as though she were the same age as Dougie.
Dougie. Ugh-y Dougie. Not for the first time she flashed through a quick fantasy of him being conveniently abducted by aliens. Conveniently and permanently.
“He’s just being rambunctious,” her parents always said.
Rambunctious. That made it sound cute. Obnoxious was the correct word, a word that would describe the sort of kid who—​
“AAARGH, I’M A GIANT MONSTER!!!”
—​who would rudely interrupt the narrator midsentence and trample your sandcastle and then run off down the beach giggling before you even had a chance to shout, “DOUGIE!!!”
“That’s IT!” said Emily again, looking at her ruined sandcastle. “I’ve HAD IT!” She was aware that she had declared that that was IT and she’d HAD IT and stormed off down the beach once before, but this time it was really true, and so she stormed off even farther down the beach.
Toward her destiny. The one mentioned at the beginning of the chapter. The one that will almost certainly lead to her destruction.
Emily was wandering along the edge of the water, picking up and examining the small stones and pebbles strewn on the wet sand: “Hmm. Igneous. Interesting,” or “Quartz. Perfect.” The best ones she placed in a little plastic bucket. As she collected rocks she continued muttering to herself: “Stupid family. Stupid new school. Stupid Kristy Meyer . . .” She came upon a small puddle of seawater left over from the high tide and spotted her reflection in it: frizzy hair like her mother, which Emily hated; a slightly too-big nose like her father, which Emily also hated. She stuck out her tongue at herself—​“Stupid me!”—​and moved on.
Then she saw it.
It was ahead of her, halfway sunken in the wet sand, appearing and disappearing under a few inches of water each time a wave came in.
She crouched down and picked it up.
It was a stone, the most curiously shaped stone Emily had ever seen: weirdly rectangular and flat, a light grayish-brown, maybe half an inch thick. Its form, although rough and irregular, reminded her of nothing so much as a cell phone.
The thought made her laugh grimly. “I’m getting a phone after all,” she said out loud.
And right then she had the strangest sensation: that the stone vibrated briefly in her hand, as if in friendly recognition. Hello, the stone seemed to say. There you are! And in that same brief moment—​no more than the time it took for the next wave to arrive and spread itself over the shoreline and cover her feet—​it seemed a voice spoke to Emily, a voice without words, filling her mind with rather unsettling thoughts of distant lands and profound mysteries and perilous exploits. And of power.
Then the wave receded and the moment was over.
Emily stood stock-still, barely breathing, staring at the stone, wondering if she had imagined it. Everything was normal. The seagulls squawked. The waves made their gentle crashing noises.
It had been like a poem, she thought. Or no, like a song. Or the feeling you get when you hear a song. And there was something else. Something . . . a little scary. She could have sworn that she had heard another voice, hidden away beneath the songless song: a cheerful voice, yes, but not at all friendly. A voice that spoke actual words.
What it had said, she thought, was, “I can’t wait to eat you.”
“Whaddya got? Whaddisit! Gimme it! Lemme see!”
Dougie grabbed at the stone, snapping Emily out of her reverie.
“Dougie! Leggo! That’s mine!” She pulled the stone out of his reach, twisting and turning to keep it away from him as he snatched at it, the odd experience already forgotten.
“Kids!” Her father, calling to them from down the beach, waving for them to come back. “Time to go!”
“C’mon,” said Dougie. “Lemme just see it!”
“Dougie, no!” she said. She wasn’t sure why she cared that much, but he was not getting this stone. “Here,” she said, shoving the bucket full of rocks at him. “You can have these.” Emily started tromping back toward her parents.
The stone felt warm in her hand.

That night in her new bedroom that she didn’t like in the new old house that she also didn’t like, Emily sat on her bed and examined the stone curiously, tracing its surface with her fingertips. She wasn’t sure what sort of stone it was—​maybe metamorphic, she thought, squeezed into its unusual shape by unimaginable heat and pressure deep in the earth, eons and eons ago. This time she didn’t hear or feel anything: no unsung song, no voices either friendly or threatening.
“You’re just a rock,” she said out loud.
“Emily, bedtime,” said her mom from the hallway. “Lights out.”
“Okay.”
She placed the flat stone on her windowsill, climbed back into bed, and turned off the lamp on her nightstand. She was soon asleep.
The stone lay on her windowsill in a patch of moonlight.
Gaining power.

Michael Rubens is the author of the novels The Sheriff of Yrnameer, Sons of the 613, The Bad Decisions Playlist, and Emily and the Spellstone (June 2017). He is a correspondent and producer for Full Frontal with Samantha Bee, and has previously produced for The Daily Show with Jon Stewart and Last Week Tonight with John Oliver. His writing has also appeared in places like The New Yorker Daily Shouts, Salon, and McSweeney’s. He lives in Brooklyn, New York, to help alleviate that area’s critical shortage of writers and producers.

Michael is represented by John Silbersack at Trident Media Group.

PPS I’m sure the book “Baking to Get Baked” is a fine publication and all, but while I share the same name as one of the authors, he and I are not (at least to my knowledge) the same person. Meaning, you can contact me for advice on how to make your weed brownies, but be aware that I don’t even know how to make regular brownies so any counsel I provide should therefore be regarded with skepticism.