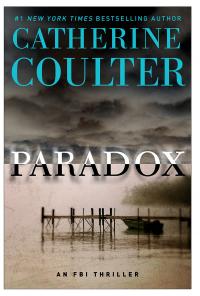 With unparalleled suspense and her trademark explosive twists, #1 New York Times bestselling author Catherine Coulter delves into the terrifying mind of an escaped mental patient obsessed with revenge in this next installment of her riveting FBI series. When he fails to kidnap five-year-old Sean Savich, agents Sherlock and Savich know they’re in his crosshairs and must find him before he continues with his ‘kill’ list.

Chief Ty Christie of Willicott, Maryland, witnesses a murder at dawn from the deck of her cottage on Lake Massey. When dragging the lake, not only do the divers find the murder victim, they also discover dozens of bones. Even more shocking is the identification of a unique belt buckle found among the bones. Working together with Chief Christie, Savich and Sherlock soon discover a frightening connection between the bones and the escaped psychopath.

Paradox is a chilling mix of Dr. Jekyll and Mr. Hyde, old secrets that refuse to stay buried, and ruthless greed that keep Savich and Sherlock and Chief Ty Christie working at high speed to uncover the truth before their own bones end up at the bottom on the lake.

From the moment I picked it up, I could not put Paradox down. My shock and awe at the perpetrators and the enforcement that tried desperately to figure out who and why was all consuming.

It’s a completely new, but familiar link in the FBI Thriller series that you won’t want to miss — whether you’ve read the others, or not. Paradox is an all comsuming ride on the crazy train as you try to comprehend how all of the pieces fit together.

Gatewood stood on Point Gulliver, a low promontory that stuck out into Lake Massey like a fat thumb. It was the perfect movie poster for the classic haunted house, made of unrelieved pale gray stone quarried from Scarletville, sixty miles east. There was a wide porte cochere along the side, a detached garage beside it. The driveway wound through the trees to a narrow two-lane road. There was a long, skinny beach of pebbled coarse brown sand dotted with tumbled piles of driftwood and rocks strewn about. A long dock that looked ready to collapse stretched fifteen feet over the water.

A half dozen oak trees faced the lake, stalwart sentinels, misshapen and bowed from years of winter storms. A wide gray stone path led from the dock to six deeply indented stone front steps. The porch was narrow, and Savich could see from twenty feet away that vandals had ripped up many of its dark wooden planks.

Savich paused, stepped back, studied the house, and opened his mind. He felt nothing but the sun’s warmth on his face and a cool breeze off the lake. He’d bet the gray stone hadn’t looked this grim when people still lived here. He could picture colorful flowers in the beds and boxes hanging from the ceiling of the porch, a rich green lawn, a good-sized boat tied up at the dock. He turned slowly and looked back over the lake. He pictured the murderer wearing a ball cap and dark jacket, rowing the Green Gaiter through the early morning fog away from the dock. Had he forced Ryan to hold still while he tied weights around her body to keep her under once he’d killed her? Why hadn’t she fought him? Had he parked a car in the porte cochere? Or hidden it in the garage? What did he do with the oar he’d struck her with? There had to be blood on his jacket. What did he do with it?

Ty pointed. ‘That’s my house, directly across. See the dash of bright red? That’s rhododendron in one of my flower boxes.”

Savich stowed the questions for the moment. “you’ve got quite a location.”

“I was lucky. The lady who lived at Bluebell Cottage – no, there aren’t any bluebells around here – decided to move to Florida. She gave me a great deal. Let’s have a look at the Green Gaiter.”

They walked the stone path down a slight incline covered with tall blue lobelias, pale purplish-pink Joe-Pye weeds, swatches of black-eyed Susans, and other plants Ty couldn’t identify. Charlie walked to the end of the dock and pointed out and down. They saw the hazy outline of the Green Gaiter, sitting upright on the rocky bottom some fifteen feet down. A simple rowboat, its only distinctive feature the acid-green paint job. Charlie said, “I don’t see any oars. I guess they floated away.”

Ty said, “Even if we recover the oar he used to kill her, it wouldn’t help, the lake water would have washed it clean.”

Savich said, “I gather you haven’t been inside the house?”

Charlie shook his head. “No reason to since teenagers found the rowboat in the water.”

She paused on the first step and turned toward Charlie. “Charlie, would you stay here, keep a lookout for the FBI forensic team?” Since he’d been raised on the stories of Gatewood’s bloody history, she imagined the last thing Charlie wanted to do was go into Gatewood. Charlie looked relieved, but he tried to be cool about it. “Sure, not a problem, Chief, I’ll keep an eye on the Green Gaiter.”

Savich followed the chief and Flynn up the steps onto the wide-oak planked porch and into the house through the double front door, once beautifully carved and now so battered it looked ready to fall off its hinges. It creaked when Flynn pushed it open.

Ty laughed, hating that her voice sounded high and jumpy. She said, “I hope the script doesn’t have us going down the basement stairs.”

Flynn said, “Hey, there are three of us, and we’re armed. No self-respecting ghost would want to take us on.”

Savich stopped dead in his tracks when he stepped into the entrance hall. He felt a bone-numbing cold.

Catherine Coulter is the author of 70 novels, including 66 New York Times bestsellers, occasionally, after exhaustive prayers, hitting #1. She earned her reputation writing historical romances to pass the time while aboard the ark. Over a decade ago she added suspense thrillers to her repertoire– with great success. The Cove, the first book in her bestselling “FBI Suspense Thriller Series” spent nine weeks on the New York Times list and has to date sold over 2 million copies. Since then, she has written 16 more bestselling thrillers in the series, including The Maze, The Target, The Edge, Riptide, Hemlock Bay, Eleventh Hour, Blindside, Blowout, Point Blank, Double Take, Tailspin, Knockout, Whiplash, Split Second, and Backfire. Her 17th FBI thriller Bombshell will be out in all formats July 9, 2013. Coulter is now working on a new suspense thriller series — A Brit in the FBI — co-writing with bestselling author JT Ellison. The first book in this series, A Final Cut, will be released in September 2013.

For Coulter’s first novel, The Autumn Countess, she chose a Regency setting for her debut because, says Coulter, “as any published author will tell you, it’s best to limit the unknowns in a first book, and not only had I grown up reading Georgette Heyer, whom I worship, but I earned my M.A. degree in early 19th century European History and could fight in Napoleon’s army, or join the Allies and beat his butt with Wellington.”

Following The Autumn Countess, Coulter wrote six more Regency romances. She then turned to long historicals and eventually interspersed them with contemporary suspense novels, beginning with False Pretenses in 1988, her very first hardcover.

Coulter grew up on a horse ranch in Texas, and graduated from the University of Texas, receiving her graduate degree from Boston College. She became a speechwriter on Wall Street, then, to her joy, she was able to quit her day job and become a full-time writer.

She lives with her physician husband and three cats in Marin County, California, right over the Golden Gate Bridge. She loves to travel, loves to kamikaze down the ski slopes, and reads voraciously while recuperating. She likes to laugh, loves a good joke, and believes the publishing business is too crazy to take seriously.

If you read just one of Coulter’s FBI thrillers, she’s got you, so prepare for eye strain and jumping at things that go bump in the night.