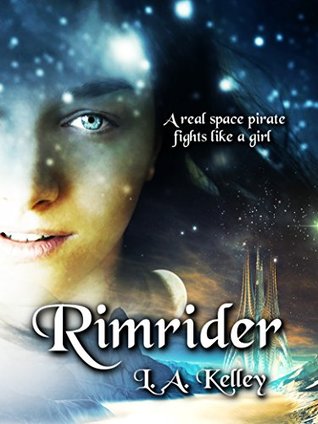 Teenager Jane Benedict is awakened by her father and ordered to memorize a mysterious code. Hours later, Mathias Benedict is dead and Jane and her brother, Will, are wards of United Earth Corporation. To evade the company’s murderous clutches and uncover the meaning of her father’s last message, Jane leads Will on a desperate escape across the galaxy aboard the Freetrader smuggler ship, Solar Vortex. Tangled in the crew’s fight against UEC, Jane saves the life of young smuggler Maclan Sawyer and learns her father’s code identifies a secret cargo shipment that may spell doom for the entire Freetrader cause and the extinction of an alien race.

Piracy, intrigue, romance, and a daring rebellion from Earth wait on the planet Rimrock. Will Jane answer the call to adventure and find new purpose on the galactic rim or will death for high treason be her fate?

by L. A. Kelley
It’s not easy running a starship. The crew needs to be the best of the best. The brightest of the brightest. Just make sure most of them are male. Back when Star Trek first aired, girls were delighted to see a woman on the bridge who wasn’t serving coffee. Of course, Roddenberry only made her an intergalactic telephone operator, but at least she was there. Call it The Uhura Syndrome. We wanted her to be more, but she wasn’t allowed. Oh, occasionally Yeoman Rand made an appearance, too, but we all suspected the truth. Traditionally, a yeoman took care of the captain’s personal needs, but what could she possibly do for Kirk? He wore biodegradable clothing and got his food from a replicator. Ah, of course. She was the ship’s prostitute.

Times have changed since Lieutenant Uhura’s heyday. Girls still haven’t completely broken through the glass ceiling of Star Command, but they’re getting close. Although many science fiction novels today have one female character play a leadership role in a story, they rarely have two. Sometimes, like in The Martian, they’re even realistic, but too often they fall into the trap of super aggressive warrior women. There’s nothing wrong with that. These characters can be fun, but why are there so many and why do they act as if being female was something to be downplayed or shameful. The term ‘girl’ is even an insult. How often has a character in a book or TV snarled, “What are we? A bunch of girls?” (Maybe if you were, you’d have the brains and foresight not to back your whole squad into a corner against an alien horde. Moron.)

I know a lot of woman in nontraditional roles; police officers, scientists, and members of the armed forces. You know what they all have in common? They’re smart professionals, and not a single one is ashamed of being female. They even have hobbies. That’s right. The Marine Corps major with the respect of her troops is happily married, a mother, and likes to cook. In truth, a strong woman fights if necessary, but her greatest weapon is her brains. She’s not boastful of her prowess. A truly strong woman never brags she can kick someone’s butt, but if she must she’ll simply do it and then go home and decorate a cake. Maybe invite you over for coffee, too, but don’t ask her to serve it on the bridge. That’s not her job. She’s running the place.

Enjoy your hyper aggressive warrior women, but I’ll stick with the tough, brave, smart girls who don’t realize their capabilities until put in an impossible situation and their true strengths shine. They don’t have to walk, talk, and act like the boys to get the job done. They can have both hobbies and adventures and be brave and loyal and true leaders. They maybe next time someone says, “What are you? A bunch of girls?” the girls will answer “Absolutely, and you’re lucky to have us.”

Best-selling Kindle author, L. A. Kelley lives in Florida where the heat and humidity have driven everyone slightly mad. Every aspect of Mother Nature in Florida is evil and wants to kill you. The state has hurricanes, tornadoes, rip currents, floods, brush fires, and giant sinkholes that will drag you to hell without even time to pack a change of underwear. She considers it a favorable place to write fantasy/scifi adventures with humor, romance, and a touch of sass. Her favorite pastime is to call in Bigfoot sightings to the Florida Department of Fish and Wildlife. They are heartily sick of hearing from her.

Thank you to Samantha Lien at Roger Charlie and L. A. Kelley for generously offering this book to me for review. I loved talking with L. A. and am thankful for their post and giveaway.