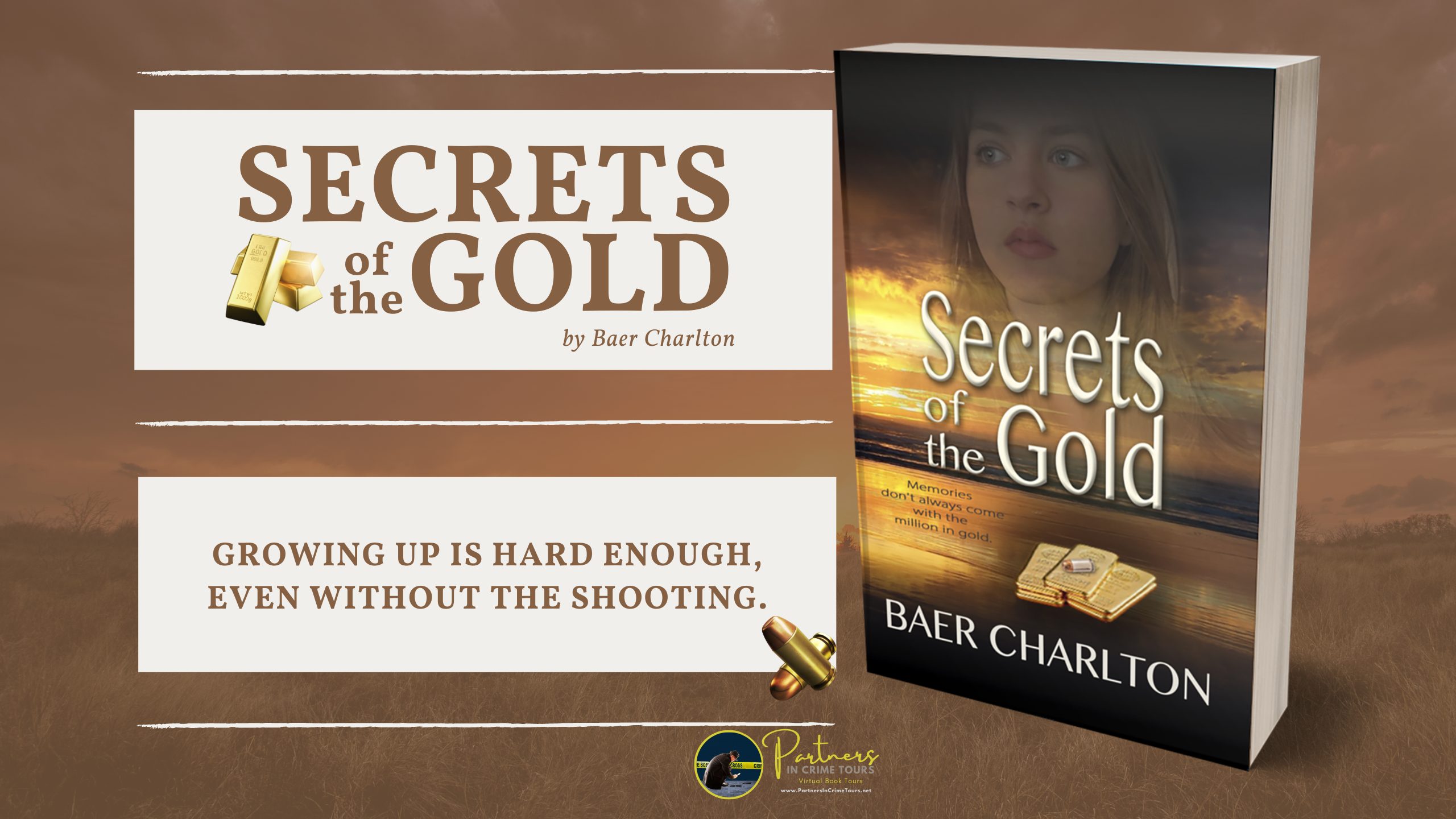 Secrets of the Gold

Concealed in his jacket are ingots of gold; he just doesn’t remember why.

A young girl running from an abusive foster home kidnaps the older biker with a mystery for a past.

Leaving the mining town in Colorado and crossing state lines, anything can happen.

What neither is looking for or expecting is friendship.

But in the cold of the desert night, life lessons can go both ways—even if they are not about a million dollars in gold.

Growing up is hard enough, even without the shooting.

Praise for Secrets of the Gold:

“you will have a very hard time putting this book down!”

Get the Low Down from Baer Charlton:

How much of Secrets of the Gold is realistic?

Most importantly, I write characters you can run into on the street or in your neighborhood. I create characters until they are genuine enough to come wake me up in the middle of the night and tell me I must come downstairs and “write this stuff down.” Mostly I draw on people I have met or known.

The motorcycle in Secrets of the Gold, is a top-of-the-line Indian motorcycle. In the past, I have owned two Indians. One I restored from the ground up. When I wrote about the older guy, the main characters meet, and his experience of restoring a motorcycle, came from my past. The new full dressed Indian is a marvelous machine and it would be a lot of fun to ride. But I also can’t stand the idea of garaging a motorcycle for half the year. So, maybe I’ll just borrow one some time.

I grew up in the high desert of California, so I know the beauty my main characters talk about. California and Arizona have unique beauties in their sand, foliage, and land formations. I’ve been in both. The cinder field, that plays an important part in the book, is beyond impressive. It’s not a place you can go to and stand for a few minutes and leave. But once you walk around the field, the whole is overwhelming.

The resort is also an actual place. The food is spectacular; the pool is a delight, and the spa will have you coming back. The staff is as helpful and personable as they are invisibly there. It only takes a couple of days to understand why my character Kaminski lives there.

In my twenties, I took off across the United States on my motorcycle. In a small town, I asked the woman at the gas station where she would eat. She directed me to a small café. It was my first experience with biryani, but not eating goat or lamb. And the family explained about the turban and the Sikh religion. The Indian food is always on my list of favorite restaurants. The spices fit my palate, and I understand the complexities of their use.

My books have a few things in common. First, they always have an animal. Not always a pet, but close enough. The other is I have a point to get across. Not always political. But with this it is about the broken foster care in America, and the importance of a woman to make her own choices.

Are you ready to read Secrets of the Gold? I know I am! Check out the excerpt 👇

Someone unexpected at the front door is exciting—for a nine-year-old girl. But time and experience change people.

The sound of cheap sneakers slapped on the cheap flooring. Military housing, even off-base, has never changed. Expensive big toys were always more exciting for congressional representatives than looking after the troops and their families.

“Check the peephole before you open the door.”

The polished brass belt buckles dully reflected the peeling white of the door. The dark blue of the uniforms wasn’t what she was used to seeing around the base, but she had seen them occasionally.

Pulling on the door, she yelled over her shoulder. “It’s a couple of marines like Daddy.”

The enormous crash at the back of the small apartment ricocheted off the rigid walls and out the open door. It hit the two lieutenants hard.

One with their mouth half open.

The man looked at his female companion as she hurried into the apartment. The man reached for the girl’s arm.

The California sun did nothing to brighten the day. The two lieutenants in dress blues stood a short distance away. The casket sat draped with flowers, but only two adults and a young girl filled the fourteen chairs.

The girl’s hazel eyes appeared washed out—more watery-blue than green. The swell of her lower lip slowly sucked in and then released over and over. The blink had nothing to do with what the chaplain was saying. It had nothing to do with her world. The black dress didn’t fit her, but at least it covered the scrapes and scars on her knees. The long sleeves performed the same service for her arms. The rusty blonde hair, chopped at the center of her neck, was the only acknowledgment of her being less than delicate.

The deep low rumble of the officer’s voice left his Minnesota lips motionless. The sound carried only to his partner. “What now?”

“Any relatives at all?”

The woman turned her head slightly. “There’s an older uncle. He’ll be available, possibly in ten to fifteen—if he behaves this time.”

The man frowned and looked out from the side of his eye. They had worked together long enough for the silent shorthand.

His eyes didn’t move. He was waiting for the boot to drop.

“Beat his wife and then cut off her breasts and legs to let her bleed out.” Her eyes moved to lock on his. “He caught her in bed with his best friend.”

The man’s frown furrowed deep. “And his friend? What did he do to him?”

The woman’s eyes snapped to a distant tableau—seven marines with seven rifles for a different burial. “You mean her. His best friend since high school. He beat her to death with the waffle iron.”

They both came to attention and saluted the three-shot salute of the honor guard from across the cemetery. The other funeral was well attended, even though it was unusual for military internment with honors to be held in a civilian cemetery. The passing thought was that the funeral was for a much-loved senior member of a large family.

“Did they cross-check the weapon of choice for a match…?”

If the dead were not theirs or family, they were fair game for lighthearted banter.

“The prints matched. The iron was still hot when he struck.”

The last rifle volley faded away as three riflemen gave their squad leader a cartridge. The two officers watched as the squad leader marched over to the casket and began folding the flag with the rest of the honor guards. The three shells folded into the flag forever. Some thought the seven riflemen firing three volleys was a twenty-one gun salute. But the tradition didn’t come from salutes of Man-O-War dreadnaughts but to let an opposing army know they had cleared the field of battle of their dead. The three spent shells also had a simpler meaning than many thought—the flag was from a military funeral. Nothing more. They presented the folded flag to the soldier’s spouse or parent.

The two officers couldn’t tell the woman’s age through the black veil. The man nodded his chin toward the small girl, who looked frightened by the whole proceeding. After that, they resumed standing at ease.

The female lieutenant spoke softly. “Child Services is picking her up this afternoon.”

“None of the family friends could take her? Keep her in the same school or with people she knows?”

The woman rolled her eyes shut and opened them again as she faced the man. “You grew up a navy brat. How many new schools did you go to before you got out of high school?”

“Fifteen or sixteen.” He looked back at the woman. “Dad was on the fast track. We lived on sixteen bases in seven different countries. He wanted dragons on both arms.”

She nodded. “Yeah. A double shellback. I’ve seen a few. The tattoos become muddy, ugly, and smeared by the time you’re eighty. But by then, who cares?” 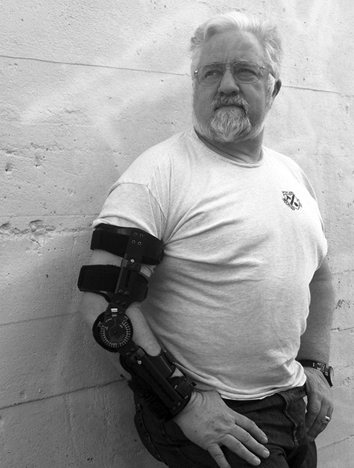 Baer Charlton, is an Amazon Best-Selling author, and a Social-Anthropologist. His many interests have led him worldwide in search of the unique.

As an internationally recognized Photo Journalist, he has tracked mountain gorillas, been a podium for a Barbary Ape, communicated in sign language with an Orangutan named Boolon, kissed a kangaroo, and had many other wild experiences in between. Or he was just monkeying around.

His love for sailing has led him to file assignments from various countries, as well as from the middle of the Atlantic Ocean aboard a five-mast sailing ship. Baer has spoken on five continents, plus lecturing at sea.

His copyrighted logo is “WR1T3R”. Within every person, there is a story. But inside that story, even a more memorable story. Those are the stories he likes to tell.

There is no more complex and incredible story than those coming from the human experience. Whether it is a Marine finding his way home as a civilian or a girl who’s just trying to grow up, Mr. Charlton’s stories are all driven by the characters you come to think of as friends.

Visit these other great hosts on this tour for more great reviews, interviews, guest posts, and giveaway entries!

This is a giveaway hosted by Partners in Crime Tours for Baer Charlton. See the widget for entry terms and conditions. Void where prohibited.

Get More Great Reads at Partners In Crime Tours

2 Replies to “Inside the Author of Secrets of the Gold”