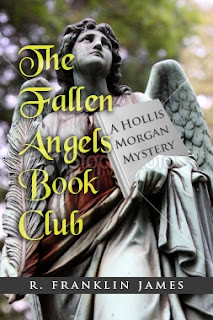 The Fallen Angels Book Club has only two requirements: the members must love books and have a white-collar criminal record. Hollis Morgan fits the bill. Left holding the bag in an insurance fraud scheme concocted by her now ex-husband, she served her time and is trying to rebuild her life. All she wants is for the court to pardon her conviction so she can return to law school.

After one of her fellow members is murdered in a scenario straight out of a club selection, Hollis is once again the subject of police scrutiny. Refusing to get stuck with another bad rap, she sets out to investigate her fellow club members. Is one of them really blackmailing the others? As a second member dies in yet another book-inspired murder, Hollis realizes that time is running out. Everything rides on her finding the killer–not just her career aspirations. She must identify the killer before she herself becomes the next victim. Everyone is convinced she knows more than she lets on. But what is it, exactly, that is she supposed to know?

Tonight it was my turn to come early and set up the space for our book club meeting. Our monthly gatherings were held in a small windowless conference room adjacent to the San Isidro Library’s main reading area. The Fallen Angels Book Club was an exclusive group, not only a love of books was required. You also had to be a white collar ex-felon.

I rubbed my hands together and peeled off gloves. My fingers felt like icicles. Thank goodness someone remembered to turn on the heat. The door opened and a gush of wind blew a cluster of leaves into the room along with Gene Donovan who tossed his hoodie and a small brown leather “man purse” onto one of the folding chairs.

“Hollis, let me help you with that.” His tousled blond hair was more askew than usual. Placing his book on the floor, he came over to where I struggled to roll out the meeting table.

“Appreciate it.” I straightened my back and allowed him to carry the bulk of the table’s weight. Fortunately, when I was with Gene, we didn’t have to speak. I caught a glance at his manicured nails and tucked mine into my palms. I liked Gene. He wasn’t afraid to show his feminine side.

We took special care not to drag the metal chair legs across the glowing veneer of the hardwood floor. Its beauty came from the handiwork of the night cleaning crew who waited for us to leave so they could begin their labor.

We settled into our chairs when Rory Norris strode in, let the door slam and dumped his books on the table. His hazel eyes did a sweep across the room as if expecting an ambush. A few more pounds had crept onto his already thickening frame.

Rory patted his black leather jacket as he laid it over the chair. “Hey, people, did you notice if they lock the gates to the parking lot? My Beemer just got detailed and I don’t want some neighborhood juvenile mistaking it for a marker board.”

“Nice touch, Norris, letting us know you got a new BMW.” Richard Kleh came in pulled off his knitted skull cap, revealing an emerging bald crown. He nodded toward the door. “Go check for yourself. Hey, Hollis, did you finish the read?”

“Of course. You’re the one who never finishes a book.”

“Well, I finished this one. It had me going until the end. The characters were realistic and…and…”

“Memorable?” I could tell from his frown he wasn’t kidding.

R. Franklin James was born and raised in the San Francisco East Bay Area. She graduated from the University of California at Berkeley and completed the masters program in Public Policy at California State University East Bay. She has also received her paralegal certification.

She and her husband live in northern California with their English Springer Spaniel, Bailey.

Catch Up With Ms. James: