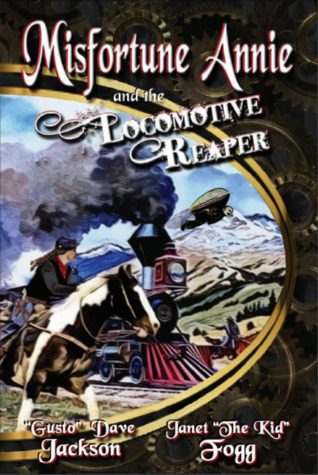 When Annabelle Fortune, the fastest gunslinger in the wild west, inadvertently stops a stranger from attacking a train — and he wears a suit that enables him to fly! — the government believes she’s the only one to have witnessed the Locomotive Reaper and survived to tell the tale.

Promising to find out what he can about her missing father, the Director of the Secret Service persuades Annie to swear in. Too soon, her detested nickname re-stakes its claim.

Partnered with Beau Slokam, whose penchant for gambling leads them straight to the Doom Gang, Misfortune Annie guides the smooth-talking Southerner in a chase through the Rockies, with her Cheyenne friend, Wontoa, rounding out their unlikely trio.

When Annie again meets the Locomotive Reaper, his gadgetry proves far more advanced — and deadly — than even top scientists could have imagined.

At a time when women weren’t typically adventurers, especially at Annie’s age, it’s great fun to see a story about a girl who loves an adventure, is capable, and well-respected. I think Annie is a great model for young girls, especially those who don’t like the feminine trappings, and she gives us a great story to while away an afternoon.

Not your typical author, Dave Jackson started writing in his constant pursuit to become a renaissance man. Then he fell in love with the art form. Comedy remains one of his many passions and he writes and performs skits as well as stand-up. Also a songwriter and guitarist, Dave has composed over 300 musical titles.

A country boy, Dave was raised in Oklahoma and taught 6th grade English for two years. He enjoys sharing the tale about when he climbed high into a towering black jack tree and grabbed a dead branch. Snap! He hurtled toward his death, but he held tight to the branch and it slowed his fall, saving his life. Dave often says that his guardian angel is overworked, considering that early incident and his wild college days and world travels. Settled now in Denver, Dave is passionate about living life to the fullest with those he loves, especially his young son.

In 2013, Dave enjoyed the release of Tattoo Rampage, by Curiosity Quills Press. In Tattoo Rampage, we find a strong female heroine in Evangelina Marquez-James, who gets her first tattoo as a symbol of courage to carry on after her police officer husband dies in the line of duty.

Janet Fogg’s focus on writing began when she was CFO and Managing Principal of one of Colorado’s largest architectural firms. Fifteen writing awards later she resigned from the firm to follow the yellow brick road, and ten months after that signed a contract with The Wild Rose Press for her historical romance, Soliloquy, a HOLT Medallion Award of Merit winner.

Janet once participated in a successful rattlesnake hunt (capture, not kill), has climbed two dozen of Colorado’s Fourteeners, was alternate on a winning trapshooting team, and recently received her motorcycle endorsement.

Thank you to Janet Fogg, Dave Jackson, and Roger Charlie for generously offering this book to me for review.
If you’d like to join in on an upcoming tour just stop by their sites and sign up today!