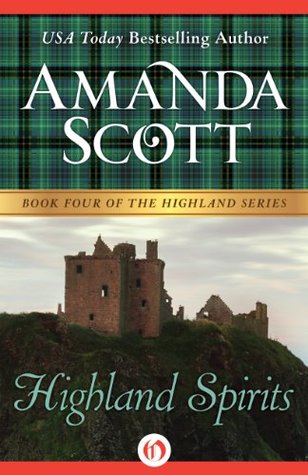 In the final volume of Amanda Scott’s engrossing Highland series, a Scottish heiress falls in love with a man who seems to have been plucked from her dreams.

Penelope MacCrichton watches the tall, broad-shouldered figure walk toward her across the mist-shrouded loch. Is he a phantom, a restless, sensual spirit fated to live only in her secret fantasies? Or is he the seductive, brooding stranger she meets later in London…who may not be a stranger at all?

Michael Mingary, Earl of Kintyre, is enchanted by the reserved Highland heiress, even as he’s haunted by unsettling dreams of a ghostly Scottish castle. Desperate to save his family legacy, he strikes a bargain with the Campbells—a clan with whom he has an old score to settle. But when Penelope makes a bold counter-proposal, he’s tempted beyond all measure. Surrendering to passion, Michael and Penelope gamble on a love that holds the promise of the future—a love that could be the fulfillment of all their dreams.

What I liked: I liked how Highland Spirits pulled the stories together and made a new and fun story from them. I really liked Pinkie and Michael. They are both great people and I found them interesting.

If you’d have asked me around the middle of the book, I’d have said it was ok. But, looking back I can honestly say it’s a really good book. There is so much imagery and history contained in Highland Spirits that you can’t help but feel immersed. I learned so much about what London it’s living conditions were while reading! I think it shocked me more that I didn’t know these facts previously.

Overall, I found Highland Spirits to be an extremely romantic book laced with a captivating history lesson. Plus, there was plenty of adventure.

What I didn’t like: I really did like Highland Spirits but there were two problems for me. First, there were a LOT of characters to keep track of. They kept getting jumbled for me and I had to look back to see why they were important. The second thing I didn’t like was the vernacular. I had times following the conversations at times.