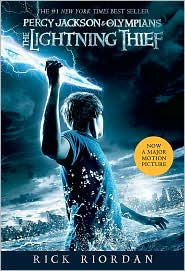 Not that it wasn’t a good book. It was a terrific book. I couldn’t put it down. I’m just saying that it’s not such a leap from the Harry Potter series. First there is a hero who has been tormented by ‘monsters’ his entire life. His parental situation is sketchy, at best. He’s never met his dad. His mom is perfect but dies in the first chapter. His step-dad loves sending him to boarding school.

Then he goes to a summer school so that he can be with other kids ‘like him’. They actually all end up being half-bloods – half human and half God. He gets to stay in the cabin with the children of Hermes because they don’t know who his father is and Hermes takes in lost souls.

Personally, I loved the book. I liked Harry Potter – but I get WAY more into Greek Mythology than I do magic so this was much more up my alley.  Honestly, I was prepared to force myself to read it as I do so many of the YA books I’m checking out for CJ but I really couldn’t put it down – I read it in two days! while still working and ferrying, and mom-ing and all that other stuff.

Another thing – I generally cannot read past tense books. For some reason they books I read are all present tense and I am unable to drag myself through a past tense book. This is written in past tense and it didn’t bother me a bit – honestly I’m shocked! (It really sounds mean when I say it..)

I definitely recommend getting this for your YA children. However, if they’re younger – do what we did and grab the audiobook. It’s worth it! Christian read the book but has also listened to it several times – even the youngest at 6 would enjoy it!

Rating: A
Hubby Rating: A+

“It ranks with Star Wars, Lord of the Rings, & Harry Potter — which let me tell you are the only books he’s read in the entire time we’ve been married”

“It has all of the elements I like in a book – action & action. That’s really all there is to say”

4 Replies to “The Lightning Thief”